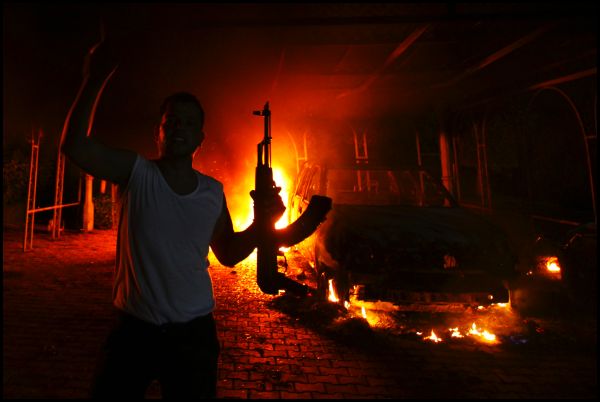 Ahmed Abu Khattala, a Libyan militia leader, has had the first charges filed against him by prosecutors in the September 11, 2012 attack in Benghazi, Libya. Nearly a year after the attack that left four Americans dead, including US Ambassador Christopher Stevens, CNN is reporting that a indictment under seal has been filed against Ahmed Abu Khattala.

The investigation of the attack last September 11 that killed Ambassador Christopher Stevens and three others continues, these people said, as investigators try to build their case against Khattala and others who authorities believe were involved.

Attorney General Eric Holder had earlier this year promised congressional lawmakers the Justice Department would soon make public what actions it would take.

With the anniversary of the attack just over a month away, the Justice Department has come under criticism for the lack of public progress in the case.

But people close to the case said the investigation has moved significantly in recent months.

On Friday, Jason Chaffetz (R-UT) demanded to know why investigators had not captured or killed any of the suspects involved in the attack on the U.S. diplomatic mission in Benghazi.

“One of the pertinent questions today is why we have not captured or killed the terrorist who committed these attacks?” Rep. Jason Chaffetz, R-Utah, told reporters. “News out today that CNN was able to go in and talk to one of the suspected terrorists, how come the military hasn’t been able to get after them and capture or kill the people? How come the FBI isn’t doing this and yet CNN is?”

Chaffetz was referring to Ahmed Abu Khattala, who was recently interviewed by CNN. Khattala has been described by U.S. officials as the Benghazi ring leader of the al-Qaeda affiliated militia group Ansar al-Sharia. Ansar al-Sharia is one of several groups that filled the vacuum following the overthrow of Moammar Gadhafi.