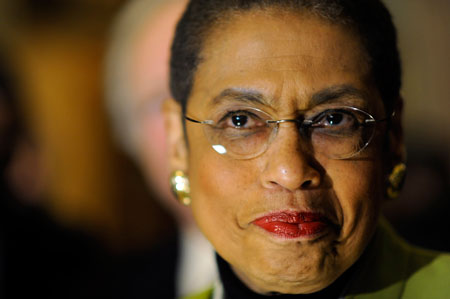 Washington, D.C. delegate Eleanor Holmes Norton left a voicemail for a lobbyist attempting to get money. Her intentions were clear in the voicemail that was released by the lobbyist. She wanted money and she thought she deserved to be included in contributions due to her seniority and the fact that other colleagues had been given donations by this lobbyist.

Eleanor Holmes Norton touts her long career along with all of the spending of “stimulus” money she is engaged in, including a three building Homeland Security project (I thought the administration said the sequester was squeezing things. Apparently not.)

Norton told the lobbyist that she was aware of contributions made to other colleagues and said, “I was, frankly, surprised to see that we don’t have a record, so far as I can tell, of your having given to me, despite long and deep work.”

“In fact, it’s been my major work….essentially in your sector,” she bemoaned. “I’m candidly calling to ask for a contribution. As a senior member of the committee and a sub-committee chair we have obligations to raise funds and I think it must have been me, frankly, who hadn’t done my homework to ask for a contribution earlier. So I’m trying to make up for it by asking for one now.

Remember that parable Jesus told in Matthew 20? Though the context is about men being saved from their sins by the free grace of God, the analogy was drawn from something that could have been an everyday occurrence. In the passage, an employer hired men at different times of the day and offered the same pay to each man. Those who worked all day got the same amount as those who only worked at the end, but they all agreed to the pay. When those who had worked all day complained, Matthew records what Jesus told the man.

But he answered one of them and said, “Friend, I am doing you no wrong. Did you not agree with me for a denarius? ‘Take what is yours and go your way. I wish to give to this last man the same as to you. Is it not lawful for me to do what I wish with my own things? Or is your eye evil because I am good?”

Is Eleanor Holmes Norton not already paid by the taxpayers? I believe she is and yet she thinks she is entitled to this lobbyist’s money simply because the lobbyist gave to some of her colleagues. In other words he was generous with his own money. She had no claim to it. Even when she “asks” for a contribution, she is doing so in the manner that she thinks she shouldn’t have to be asking for one, but that the lobbyist should have sent it in the first place.

Norton provided her address and said she would follow up with a note.

A couple of things to note. Since when is it an “obligation” for congresspersons to “raise funds” simply because they have seniority in Congress? I thought tax dollars were what funded things, not shakedowns.

In a statement released by Norton, she claims that her request was completely “above board and ‘standard.’”

According to current laws, she is correct. However, just because something is legal does not make it the right thing to do.

Noah Baustin informs us that “there’s a reason that this voicemail received major press. In any other country in the world, Norton’s actions would be labeled as blatant solicitation of a bribe, (or maybe baksheesh over in Asia) but in the Washington DC, she was just playing the standard game. Taking money from the interests they regulate is how our representatives stay afloat in a system dominated by big money. It’s also how the wealthy special interests are able to keep our politicians on a tight leash.”

Baustin points to the other thing to note and that is the corruption that comes from special interests, money and politicians. The politicians and special interests are working hand in hand for their mutual benefit at the expense of the American citizen.