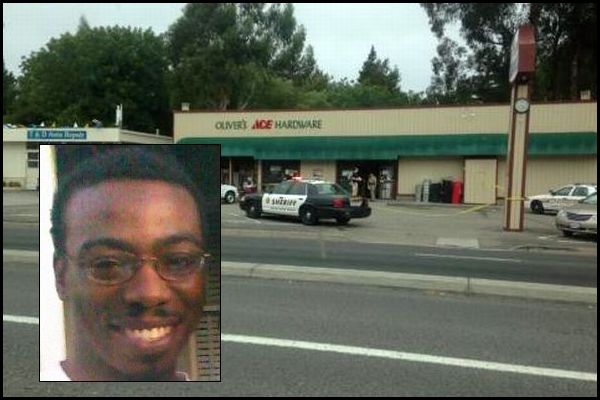 A man walks into a hardware store and fatally stabs a clerk 17 times all in the name of Allah. Does anyone else get tired of these stories? This did not happen in Egypt. This happened in California. Yet you will not be reading much about this from the mainstream media.

A 34-year-old Sacramento man who went to an El Sobrante hardware store on a “mission from Allah to help people” before fatally stabbing an employee 17 times was arraigned on murder charges Tuesday, prosecutors say.

Daymond Agnew, charged with murder with use of a knife in Sunday’s slaying of 49-year-old Daniel Joseph Stone, of Pinole, at Oliver’s Ace Hardware, did not enter a plea and was ordered to return to the Richmond courthouse on Aug. 13 with a public defender.

Agnew has been held in County Jail on $1.3 million bail since prosecutors say that — by sheer coincidence — he was captured in the store owner’s family home, located not far from the store at 4071 San Pablo Dam Road.

According to witnesses, surveillance video and the defendant’s own account, Agnew went to the store and walked up to Stone and a customer as they were discussing a paint purchase, deputy district attorney Mary Knox said. After Stone told Agnew that he would help the customer on his own, Agnew used the store’s spray paint to paint his face in Oakland Raiders’ silver and black because the football team is “in favor with Allah,” Knox said.

Agnew stabbed Stone at least once in the store after Stone told colleagues to call 911, Knox said. Agnew allegedly stabbed Stone many more times outside the store before running to a nearby creek.

Absolutely bizarre. What do the Oakland Raiders have to do with jihad? There is no doubt that the “religion of piece” is creating some of the most criminally insane minds of our generation.

America needs to have some candid discussion about Islamists. They can not co-exist here.

Just once I would like to see one of these hate crimes treated with the same media hype as the Martin-Zimmerman case. Then we might actually start to get some answers.

I will keep printing these stories any time I can and it’s not that I am trying to beat a dead horse. I am simply trying to wake people up to what is going on around them. If the mainstream media will not report these hate crimes then someone has to.

Agnew’s family noted that he had recently converted to Islam. People need to understand that it is not always about years of conditioning. The truth is that bad people tend to convert to Islam simply to have an excuse for their bad behaviors.

You doubt that? If any of these redneck wife beaters from my neck of the woods find out that discipline is encouraged in Islam, they will be asking where they can sign up.

Angry young men are attracted to “the religion of peace” and don’t think they are not.

How many people have to suffer horrific deaths before America starts talking about this issue?

It will be a lot more as long as we have a president who is on his own personal jihad.

If a Christian would have done this on a “mission from God” this would certainly be national news.