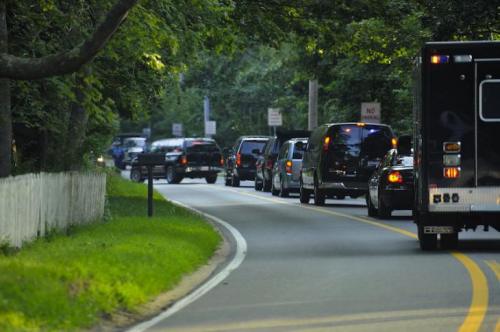 The Weekly Standard reports that Obama and his family, once again, will have their summer vacation in the tony and elitist Martha’s Vineyard (MV), arriving this Saturday.

The POS had vacationed in MV every summer since 2009, except last year because of his reelection bid.

Local papers of Martha’s Vineyard, such as MVTimes.com, are warning residents about road closures: “The Secret Service will close South Road to all vehicle traffic near the president’s vacation compound on Snail Road beginning about 2 pm, Saturday afternoon. Only abutters and emergency vehicles will be allowed to pass through security check points between Meeting House Road to the east and Wooton Bassett Road to the west, for the duration of the Obamas’ vacation, from August 10 to 18.”

But some of MV’s residents are not happy that their island, once again, is hosting the POS.

A reader of MVTimes.com, JamesPi3, wrote this comment: “He really needs to find another place to go. He treats people here terribly.”

I went on MVTimes.com and found these other reader comments, for your delectation:

Jeff1911: “Soooo they are staying in a home that was bought and paid for by an entrepreneur whose company does the exact thing as that evil Mitt Romney. During the election it was described as ‘sending jobs overseas’ but when Lord Obama needs a place to relax after two weeks of ineffective leadership it’s called ‘corporate reorganization.’”

Jason: “I read about this extravagance as I begin my last day of work before my indefinate layoff. Maybe I should have been president?”

Lone_Conservative: “Mr Obama, Please make this your last visit to our island. You ARE NOT a good neighbor. Otherwise, visit in the winter when navigating the few roads on the island would be less of a problem and your visit less of an imposition.”

Ouch Man: “It’s well known that terrorists emanate on the Vineyard. The only times I’ve been asked to pop my hood and have my truck and tool box searched is leaving the Island. If Chief Cioffi is asked to provide his department services or protection he should demand his department get paid first up front in a written contract. The Secret Service is famous for not paying their bills. If I was on the job in Chilmark and told to work some overtime I would come down with some Blue Flu. Why should tax payers be on the hook for Presidential vacation expenses? I’m hoping for ten days of rain and fog. Meanwhile the middle east is in turmoil, embassies are closed. The President is on vacation, perfect time for Israel to try something new. If it’s not safe in Chilmark maybe he stay home and close the New England White House just like the embassies.”

Steven Sjogren: “All hail the King.”

Daniel Mayhew: “Welcome to Chilmark president Putin. You should think about writing this article in many different languages to avoid confusion at the checkpoints. Enjoy your stay while you inconvenience all the locals.”

7bus: “It’s outrageous that they picked a home with less security than they previously had and are now making so many of us pay the price. Plenty of up-islanders have family coming to visit for their vacations at the same time, and inconveniencing so many people is terrible. And I am an Obama supporter!”

To which VeryAnnoyed responded: “You get want you voted for, an elitist! Thank you very much!”

An Obamabot Evan Fielder gushed “President Obama, First Lady, and kids ; Welcome to our Island again. Most of us love and support you. Enjoy your stay.” Fielder’s comment is the only positive comment out of a total of 23 comments. Readers expressed their disapproval of Fielder’s comment, giving it only 14 approving ↑ arrows, but 230 disapproving ↓ arrows, although one has to sign in to down-vote a comment.

In contrast, Johnny Right‘s response to Fielder got 695 ↑ arrows and no ↓ arrows: “Most love him?? Not according to all the polls. Even his Obama Phone supporters are mad because they want free ipads next and it doesn’t look like they will get them until Hillary gives them away in 2016 to get elected! Only in American can a community organizer become president and then lecture Americans on the right way to run a government, as the states crumble under his mandates and cronyism.”

MVTimes.com has closed the site to further comments. LOL

Here are readers’ comments to a similar article in Vineyard Gazette about Obama coming to Martha’s Vineyard and the resultant road closure:

roberta kinnecom: “other people live on that road…ridiculous….I think next year he should go to Nantucket and spare us one year”

other people live on that road…ridiculous…..I think next year he should go to Nantucket and spare us one year – See more at: http://mvgazette.com/news/2013/08/06/presidential-visit-will-likely-close-south-road#sthash.dgT1q6IC.KykYo3DO.dpuf

Dee Ouchman: “Just say NO! Tell him to remember who he works for. If the Secret Service says it’s not a secure location he should find another.”

Bundarules: “You New England libs voted for him. Why don’t you just keep him up there.”

O’Bummer Sucks: “Why can’t he save the taxpayers some money and have a ‘staycation’ at the White House? Do us all a favor!”

DJ: “Too bad this isn’t an election year. Then he would come to the Vineyard because it would look back to his voters. Now that the election is over he is back.”

Paulli D.: “POTUS closes the Middle East embassies and says travel is OK. But here on our island they need to close a road for POTUS because the house is a short distance to the road. This guy lives a double standard, do what I say not as I do. Sounds like a Kennedy family member. He is staying in $7 million home, he sets the example for all you unemployed people out there doesn’t he? Why not stay in DC and visit the local attractions? I would say to any POTUS, go somewhere else.”

Ray Holland: “Chilmart voted overwhelmingly for Obama. They get what they wanted.”

Annonymous: “The entourage should go elsewhere if they are so concerned about security. They shouldn’t inconvenience those of who who live and work here year round!”

Ency Fokos: “August is the busiest vacation time on the Vineyard. Renters pay a lot of money to enjoy their time here. Some are only here the same time as the President plan to be here. They should not be deprived the freedom to move and drive around as always.”

Bunny: “Forget about political preference, this is a big pain for all. Seems like the Secret Service is over the top in their requirements. That said, a better house could have been chosen. I am all for the POTUC getting some vacation time and privacy but ironically he is depriving others of the same peace and quiet that he seeks. Next year take Michelle and the girls to see the national parks out west!”

I think Vineyard Gazette commenter Flyboy 7588 says it best: “The majority of people in Mass. voted for this arrogant dolt. Now deal with it.”