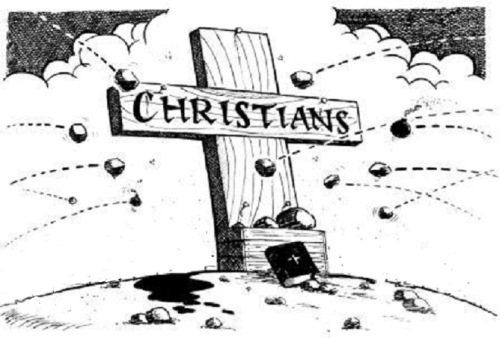 Kirsten Andersen reports for LifeSiteNews, Aug. 7, 2013, that a 26-year-old assistant to a U.S. Army chaplain was reprimanded by her commanding officer and threatened with rank and pay reductions for expressing religious opposition to homosexuality on her personal Facebook page.

The anonymous chaplain’s assistant has served in the armed forces for six years. She told Todd Starnes of Fox News Radio that she posted her thoughts to her Facebook page after viewing an online video featuring a pastor who denied that homosexuality is a sin.

So she wrote this on her personal Facebook page:

“[N]ow to all my gay friends you know I care about you so don’t think otherwise. I’m watching this documentary and this gay guy went to a church and the Pastor was telling him that he needs to embrace his way and know that it is not a sin. Ok umm wow, dude it is. I’m sick of people making Gods word what it’s not. Yes God loves you as a person but He hates the sin. Tired of hearing about Pastors being ok with homosexuality.”

But members of the servicewoman’s unit reported her to the commanding officer, who called her in and gave her a choice: Take down the message from her personal Facebook page, or get busted down in rank and pay.

The chaplain’s assistant has refused to take the comment down, and is prepared to take legal action if necessary.

She told Starnes: “We fight for the freedom that I can’t enjoy right now. That’s not right. I haven’t taken it down and I won’t take it down. It is frustrating that people are trying to silence me for something that I believe in.  I have a good record. I’ve never gotten in trouble for anything. And there’s nothing hostile or antagonistic in the post.”

Ron Crews, the executive director of the Chaplain Alliance for Religious Liberty, which offers legal aid to servicemembers whose religious liberties are violated, told LifeSiteNews.com that he is in contact with the young woman and actively investigating what happened: “We believe that Command has overstepped their bounds. Just because a person puts on a uniform doesn’t mean that they give up their liberties, including the right of conscience to express their views concerning homosexuality. This is the very thing that Congress addressed in the language that was passed in the Defense Authorization Act last year, that protects persons just like this young chaplain’s assistant.”

Crews said his group is “doing our best to protect this young lady” in “a delicate situation.” He said she is trying to do everything possible to resolve things with the Army before taking legal action.