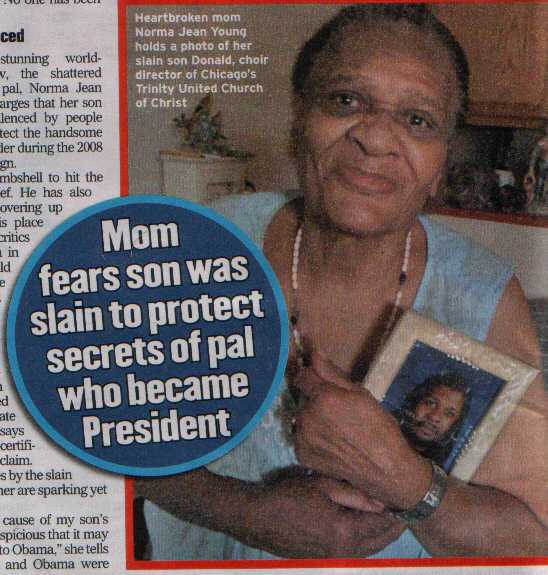 Editor’s Note: Originally posted on Fellowship of the Minds on July 25, 2010.

In late May, Wash. DC-based investigative journalist Wayne Madsen had a bombshell revelation about Obama’s membership in a Chicago gay club, Man’s Country. Madsen also reported on Obama’s sexual relationships with other men, including named D.C. politicians and Donald Young, the openly-gay choir-director of the church in Chicago of which Obama was a member for some 20 years — Jeremiah Wright’s Trinity United Church of Christ black liberation theology. Obama’s relationship with Young was confirmed by Larry Sinclair, who claims to have had two sex-cocaine trysts with Obama.

There were two other openly gay men in Wright’s church: Larry Bland and Nate Spencer. In late 2007, as Obama began his ascent to be the Democratic Party’s presidential nominee, in a span of 1½ months, all three men “conveniently” died:

Now, Young’s elderly mother is speaking out about her suspicions that her son was murdered to protect Obama’s reputation and assure his political future as President.

The story about President Barack Obama’s bi-sexual past will not go away. Now, in an exclusive interview with The Globe, Norma Jean Young, the 76-year old mother of the late Trinity United Church of Christ choir director Donald Young, has spoken out and declared that persons trying to protect Obama murdered her son at the height of the 2007 Democratic presidential primary to protect Obama from embarrassing revelations about his homosexual relationship with her son. Donald Young’s bullet-ridden body was found in his Chicago apartment on December 23, 2007, in what appeared to be an assassination-style slaying. Norma Jean Young revealed to The Globe that her son Donald, who was openly gay, was a “close friend” of Obama. Mrs. Young also believes the Chicago Police Department has not placed a high priority on finding the killers of her son. Mrs. Young, who is, herself a former employee of the Chicago Police Department, told The Globe that, “There is more to the story,” adding, “I do believe they are shielding somebody or protecting someone.”

The Globe’s revelations are consistent with information obtained by WMR during a May investigation conducted in Chicago. On May 24, WMR reported:“President Obama and his chief of staff Rahm Emanuel are lifetime members of the same gay bath house in uptown Chicago, according to informed sources in Chicago’s gay community, as well as veteran political sources in the city.” The report added, “WMR spoke to several well-placed sources in Chicago who reported that Jeremiah Wright, the pastor of Obama’s former church of 20 years, Trinity United Church of Christ (TUCC) on Chicago’s south side, ran what was essentially a matchmaking service for gay married black professional members of the church, including lawyers and businessmen, particularly those with children. The matchmaking club was called the ‘Down Low Club’ but references to it over the phone and email simply referred to the group with the code phrase ‘DLC.’ The ruse, according to our sources, was to make anyone who was eavesdropping on the communications [FBI wiretaps in the Rod Blagojevich case likely contain such references] believe that the references were to the Democratic Leadership Council, also known as the DLC . . . Among the members of the gay ‘DLC’ were Obama and TUCC’s choir director, Donald Young, an openly gay man who reportedly had a sexual relationship with Obama. Two other gay members of the church were Larry Bland and Nate Spencer. Young and Bland were brutally murdered, execution style, in late 2007. Bland was murdered on November 17, 2007 and Young on December 24, 2007. The latter was killed by multiple gunshot wounds. Spencer reportedly died on December 26, 2007, official cause of death: ‘septicemia, pneumonia, and HIV.’”

Larry Sinclair, the gay man who claimed to have had two sexual encounters with Obama in Chicago in 1999, wrote a book, “Cocaine, Sex, Lies & Murder,” in which he states that Obama was linked to Young’s murder. Sinclair wrote that he was in contact with Young shortly before his murder and Young revealed his relationship with Obama. At the time of his revelations about Obama at a National Press Club news conference, WMR doubted the veracity of Sinclair’s story due to the absence of corroborating evidence coupled with a bizarre news conference. However, since that time, WMR has received corroboration from a number of sources in a number of locations, including Chicago, Alabama, Georgia, and Washington, DC. WMR has received information that various competing camps, including the Hillary Clinton and John McCain campaigns, attempted to co-opt Sinclair and his revelations for their own political purposes. Sinclair, it should be noted, has not deviated from his original story or charges against Obama.

On June 19, 2008, WMR reported: “WhiteHouse.com held a news conference following Sinclair’s at which a video of Sinclair’s polygraph was to be shown. After experiencing technical difficulties with the video presentation, Parisi abruptly canceled the news conference and took no questions.” The aborted news conference was as bizarre as Sinclair’s. Sinclair was arrested by Washington, DC police following his news conference based on a warrant from Delaware issued by Vice President candidate Joseph Biden’s son, Delaware Attorney General Beau Biden. The Delaware charges against Sinclair were later dropped.

Sinclair’s book is now the subject of a defamation lawsuit [Daniel Parisi, et al v. Lawrence W. Sinclair a/k/a “Larry Sinclair,” et al] brought by Dan Parisi, the proprietor of the website, Whitehouse.com, who is mentioned in Sinclair’s book with regard to his involvement in polygraphs administered to Sinclair after he made his allegations against Obama public during the 2008 presidential campaign. The lawsuit is being handled by the politically powerful Patton & Boggs law firm, the same firm that represented George W. Bush’s top political adviser Karl Rove in the Valerie Plame Wilson/CIA leak, and has been filed against Sinclair, his publishing company, and distributors, including Barnes and Noble and Amazon.com in the U.S. District Court for the District of Columbia. Sinclair is currently a resident of Florida.

The lawsuit against Sinclair has been assigned to Judge Richard Leon, the Republican deputy chief minority counsel on the House Select Committee to Investigate Covert Arms Transactions with Iran, aka, the Iran-contra scandal. From 1988 to 1989, he served as Deputy Assistant Attorney General and from 1992 to 1993 was the Republican chief minority counsel on the House Foreign Affairs Committee’s October Surprise Task Force investigating the 1980 Reagan-Bush campaign’s secret dealings with Iran to ensure the defeat of President Jimmy Carter. Leon Leon was nominated for the federal bench by President George W. Bush on September 10, 2001. Leon’s involvement in so many high-level cover-ups of White House misconduct makes him an illogical choice to hear a case involving serious allegations against President Obama.

Note: Blagojevich’s defense in his federal corruption trial is slated to begin today in Chicago. Judge James Zagel has denied the defense’s request for all the government’s wiretaps to be played. The tapes, as previously reported by WMR, contain some earthy references to Obama’s and his chief of staff Rahm Emanuel’s homosexual habits.

Sinclair has told WMR that he believes the Obama White House is trying to have his book withdrawn from circulation to avoid any further embarrassments about Obama’s homosexual past and the possible involvement of his top lieutenants in Young’s murder. The Globe reported in May 2008 that a top Chicago private detective said he believed Young was “rubbed out” because of his relationship with Obama. Sinclair has echoed the private eye’s beliefs about Young and Obama. The Globe reports that before his death, Young was planning to flee to Africa to teach. The information was provided to The Globe by Young’s mother, who also now fears for her life and plans to leave her Peoria, Illinois home for a secret location. Mrs. Young said the Chicago police have warned her that her life is in danger.

Wayne Madsen has this to say in an exclusive-to-subscribers report on Jan. 19, 2012:

WMR has learned from a source who is an official of Trinity United Church of Christ (TUCC) in Chicago, President Obama’s former church, that congregants are afraid of discussing the brutal execution-style murders of two of the church’s members.

The church’s choir director Donald Young was murdered on Christmas Eve, December 24, 2007, at the beginning of the presidential campaign. Although the Chicago Police Department indicated there was a “person of interest” in the Young case, no one has been charged with Young’s murder. Another church member, Larry Bland, was murdered execution-style on November 17, 2007. […]

When TUCC pastor Jeremiah Wright retired as pastor in early 2008, several church members left the predominantly African-American mega-church along with him, according to our TUCC source. The new pastor, Otis Moss III, has shown no interest in trying to find out the killers of Young and Bland, although the church is active in several community action programs, including those dealing with violence.

The TUCC source says there has been a “stand down” at TUCC in dealing with the Young and Bland murders. Although a service was held for Young at TUCC, the church, according to the source, “ignored the two murders,” adding, “there is no interest in pursuing the murderers.”