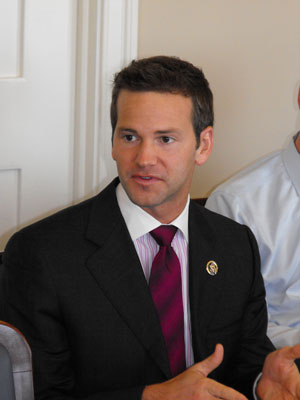 At a town hall meeting this week, Representative Aaron Schock (R-IL) took questions that asked his view on immigration reform. Interestingly enough, the poster of the following video at YouTube says that the questioner was an illegal alien. Schock indicates that a majority in the House of Representatives are in support of House Majority Leader Eric Cantor’s (R-VA) DREAM Act.

“They’re going to move one bill after another dealing with all the various issues that were contained in the Senate bill,” Schock said. “So first, the border security bill should be the first bill that moves in the House. I think that’s going to be an easy bill to pass. It passed out of the Homeland Security Committee with almost unanimous support. Almost every Republican and Democrat on Homeland Security voted for the House border security bill. I think that will pass the House and I think that’s a done deal and that’s done with. Then, you’re going to deal with your high-tech visas and your ag visa worker programs. I think, again, you’re going to get overwhelming bipartisan support on those provisions. I don’t know what the final language is going to look like.”

Schock indicated that a DREAM Act, currently being drafted by Cantor and will be introduced as the KIDS Act, will not only be introduced in the House and voted on, but promised it would be passed with bipartisan support.

“Then you’re going to have a third bill which is going to deal with your DREAM Act kids, those who were brought here illegally by their parents,” said Schock. “I think, again, you’re going to get a bipartisan vote on a House version of the DREAM Act.”

Schock said that he supports a comprehensive immigration bill like the one that is opposed by House conservatives.

The Illinois representative seemed to waffle a bit on what kind of amnesty he wanted to give to illegal aliens already in the country.

“The final bill, which will be the most difficult bill, will be dealing with people who are here currently illegally and the path – what is the solution for that,” he said. “There are people in the House who think we should find a way to grant them legal status, but not a path to citizenship. There are other people who say no, it has to be a path to citizenship. My mindset is people should come forward, have to pay a penalty and a fine, there should be a probationary period. I am not in the camp that believes people should have to leave the country in order to get in line. I just happen to believe that’s an unrealistic expectation that 11 million people are going to leave. I think it would be destructive to our economy, number one, and number two, many of them do not have a place to go back to even if they wanted to. And number three, I think it adversely affects the self-identification – if self-identifies and knows now they have to leave. I want whatever we pass to work. I want it to be a real reform bill. And I want it to be constructive to the overall process of having more legal immigration down the road.”

Schock thinks “there should be a pathway to citizenship for anybody who wants to come to America.”

“I think they ought to self-identify, I think they should pay back taxes and I think they should be on a legal probationary program,” Schock said. “So, if you break a law, if you break a law, if you do something wrong, you’re thrown out. But, I don’t think there should be anything stopping anyone who self-identifies, pays their back taxes and continues to pay taxes in our country to get in the back of the line with everyone else who wants to become an American citizen. What I don’t support is giving any kind of preferential treatment to people who are here illegally above those people who are outside our borders currently that are waiting in line.”

Did you catch that? OK stop for just a moment and walk with me through this. Schock told the audience that he thought finding the millions of illegals in the country and deporting them would be impossible. However, in the next breath he said for those who would get in line for citizenship, if they break the law, then they are thrown out. Now, he didn’t say what “thrown out” means, but we can assume it means that you are removed from the path of citizenship and would be removed from the country. Someone in the audience should have stood up and demanded that if they can throw them out when they break a future law, they should be thrown out for breaking the law in the first place!

All Schock really emphasized was “paying taxes.” Well, the reality is that everyone pays taxes here, whether they are legal or not. We pay taxes every time we buy something. What he’s talking about is income taxes, you know that little thing that is currently overseen by a corrupt Internal Revenue Service? Frankly, that is not a good argument and does not have America’s best interests in mind. I suggest watching the entire video and then contacting your representative and letting them know what you think. After all, immigration is not working, not because rules are not in place, but because they are not being enforced.