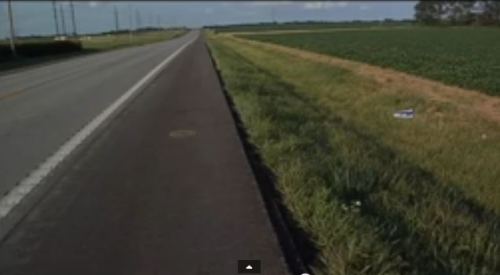 Emergency workers struggled for an hour and a half to free Lentz, pinned inside her mangled Mercedes, but to no avail. Medical workers told rescue crews that Lentz was failing and fast.

That’s when Lentz asked if someone would pray with her and a voice said, “I will.”

A silver-haired priest in his 50s or 60s, wearing the priestly garb of black pants, black shirt and black collar with visible white insert, stepped forward from nowhere. As recounted by New London Fire Chief Raymond Reed to KHQA-TV:

“He came up and approached the patient, and offered a prayer. It was a Catholic priest who had anointing oil with him. A sense of calmness came over her, and it did us as well. I can’t be for certain how it was said, but myself and another firefighter, we very plainly heard that we should remain calm, that our tools would now work and that we would get her out of that vehicle.”

Right after the prayer, the Hannibal Fire Department showed up with heavy equipment to cut through the metal. Lentz was extricated from the wreckage and into an Air Evac helicopter. At least a dozen of the rescue workers turned around to thank the priest, but he was no where in sight. The highway had been blocked for a quarter of a mile during the hour and a half rescue, leaving no bystanders and no parked cars nearby. (See Steve’s post on this, here.)

Adding to this mystery is the curious fact that the priest doesn’t appear in the 70 photos taken at the scene!

But that doesn’t mean we don’t have an idea what he looks like, because there are eye witnesses who have described the priest to KHQA.

One of them is Wanda Burr-White, who was at the crash site and with her husband had held Lentz’s head while rescue workers were trying to extricate her from the car. She remembers the priest well: “He was dark complected. He had an accent, but I’m not sure what nationality. He was probably 5’6″ maybe.” Other eyewitness accountsdescribed the priest as medium built, about 6′ tall.

Based on what witnesses saw and later described, Randall Sands used the FACES software from IQ Biometrix to make this composite sketch of the face of the mysterious priest:

Then I read FOTM’s joandarc’s comment on Steve’s post about the mysterious priest. This is what she wrote:

“Last Sunday, August 4th, was the Feast Day of St. John Vianney, who happens to be the patron saint of Catholic Priests worldwide.He lived from 1786 to 1859. Pursuant to Saint of the Day edited by Leonard Foley, O.F.M., “Situations calling for impossible deeds followed him everywhere…” He established “La Providence,” a home for girls and he was a remarkable Confessor, spending eleven to twelve hours daily reconciling people with God, and in the summer months, he spent sixteen hours a day in this capacity. Perhaps it was St. John Vianney who helped Katie Lentz and the rescuers in this impossible situation. Remember, the Church Triumphant, the angels and the saints, are with us!”

Here are two representations of St. John Vianney — a statue and a portrait:

Fire chief Reed said: “We’re all local people from four different towns. We’ve only got one Catholic church out of three towns and it wasn’t their priest. I think it’s a miracle. I would say whether it was an angel that was sent to us in the form of a priest or a priest that became our angel, I don’t know. Either way, I’m good with it.”

Katie Lentz’s mom, Carla Churchill Lentz, said emergency workers have told her there is no way her daughter should have lived inside such a mangled car. Of the priest, she said, “I do believe he certainly could have been an angel dressed in priest’s attire because the Bible tells us there are angels among us.”

“Remember, the Church Triumphant, the angels and the saints, are with us!”