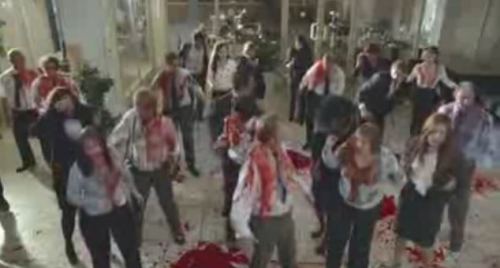 Scratch a Leftist, and you’ll find a wannabe dictator who, if he/she gets his/her way, will gladly poke you up the chimney if you so much as disagree.

The most vivid example of the Left’s murderous mind is an infamous commercial, “No Pressure,” by the 10:10 Campaign – a worldwide campaign exhorting us to reduce our carbon emissions by at least 10% in 2010.

Those who won’t reduce their carbon emissions are blown up into bits.

In the video, school children and adults who refuse to join 10:10 are blown up into bits, their blood and pieces of flesh spattering those nearby. This video/commercial is not a spoof. The people who put this together are serious and really really sick.

FOTM has chronicled other examples of the murderous mind of the Left. See, for example:

In a recent op-ed he wrote for Time magazine (good grief, does anyone still readTime?), dramatically titled “Air-Conditioning Will Be the End of Us,” Klinenberg railed against Americans’ profligate use of air conditioning. He writes:

“most Americans still believe that the wise way to use air conditioners is to crank them up, cooling down every room in the house — or even better, relax in the cold blasts of a movie theater or shopping mall, where someone else pays the bills. Today Americans use twice as much energy for air-conditioning as we did 20 years ago, and more than the rest of the world’s nations combined. As aclimate-change adaptation strategy, this is as dumb as it gets.”

Except for saving the lives of old and sick people during dangerous heat waves, and helping “truly vulnerable people” like farm workers toiling in “sunbaked fields,” or old people living alone in “broiling urban apartments,” or those noble proletariat working and “wilting” in factories of “searing temperatures,” Klinenberg sweepingly declares that “in most situations, the case for air-conditioning is made of hot air” and calls “indefensible” our “habit” of air-conditioning homes, offices and commercial outlets “into igloos on summer days.”

The sociology professor recommends that “it might well be necessary” for government to step in with “new rules and regulations” to forbid (“prohibit”) Americans from setting their air conditioning to “below, say, 70°F,” “if we can’t turn down the dial on our own.”

Klinenberg also decries how “in recent decades, the fastest-growing U.S. cities — places like Las Vegas, Phoenix and Austin — have effectively been built on air-conditioning,” and how “most designs for new office, commercial and residential property rely entirely on AC, rather than on time-honored cooling technologies such as shading from trees and cross-ventilation from windows and fans.”

Worse still is how the United States has contaminated other countries. Our  wasteful use of AC “is spreading to the nations where American culture carries influence; sales of air conditioners rose 20% in India and China last year.”

Claiming that our excessive use of air-conditioning will exacerbate  climate change, Klinenberg darkly warns that “blasting the AC will ultimately make us all even hotter” and recommends that we “put our air conditioners on ice before it’s too late.”

While I’m all for designing energy-efficient buildings with “shading from trees and cross-ventilation from windows and fans,” sociology professor Klinenberg is woefully misinformed about global warming and oblivious to the stubborn fact that our Earth actually has been cooling, not heating up.

Rick Manning of NetRightDaily alerts us to a new, peer reviewed study by a team of Dutch scientists, titled “Meteosat Derived Planetary Temperature Trend: 1982-2006,” published in Energy & Environment, which came to the stunning conclusion that global temperatures have actually been dropping since 1986.

The study took satellite derived temperature data from 1986-2006 that was collected using a European satellite system which measures thermal infrared radiation (similar to those red to blue heat maps that weather.com uses). The study concludes:

“The amazing finding of the present study is that we do not observe global warming in the period 1982-2006, but significant cooling.”

Answering its own question on what could be the cause of the astonishing global cooling, the study concludes that the cause is cloudiness: “cloudiness changes could be the mechanism behind the observed global cooling since 1982: an increase in cloudiness would decrease global radiation and increase rainfall and evapotranspiration. Both effects tend to decrease the surface temperature.”

Despite Americans’ utterly shameful profligate use of air conditioning, instead of heating up, Earth has cooled! So much for Professor Klinenberg’s bombastic op-ed.