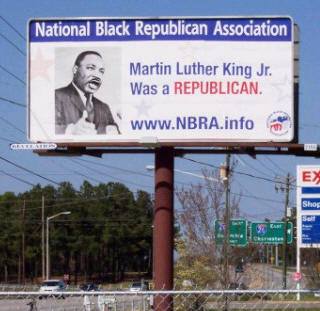 Not only was Dr. Martin Luther King Jr. a Republican, so were the first blacks elected to Congress.

The president of NBRA is Dr. Frances Rice, a U.S. Army veteran who joined the Army in 1964 as a private and retired as a lieutenant colonel after 20 years of active service. She received a Bachelor of Science degree from Drury College in 1973, a Master of Business Administration from Golden Gate University in 1976, and a Juris Doctorate degree from the University of California, Hastings College of Law in 1977—all while serving in the US Army.

Dr. Richard Swier writes for WatchdogWire, Aug. 13, 2013, that the NBRA has filed Articles of Impeachment against President Barack Obama with the following language:

We, black American citizens, in order to free ourselves and our fellow citizens from governmental tyranny, do herewith submit these Articles of Impeachment to Congressfor the removal of President Barack H. Obama, aka, Barry Soetoro, from office for his attack on liberty and commission of egregious acts of despotism that constitute high crimes and misdemeanors.

On July 4, 1776, the founders of our nation declared their independence from governmental tyranny and reaffirmed their faith in independence with the ratification of the Bill of Rights in 1791.  Asserting their right to break free from the tyranny of a nation that denied them the civil liberties that are our birthright, the founders declared:

“When a long train of abuses and usurpations, pursuing invariably the same Object evinces a design to reduce them under absolute Despotism, it is their right, it is their duty, to throw off such Government, and to provide new Guards for their future security.”  –  Declaration of Independence, July 4, 1776.

THE ARTICLES OF IMPEACHMENT

In his conduct of the office of President of the United States, Barack H. Obama, aka Barry Soetoro, personally and through his subordinates and agents, in violation or disregard of the constitutional rights of citizens and in violation of his constitutional duty to take care that the laws be faithfully executed, has prevented, obstructed, and impeded the administration of justice, in that:

He has covered up, delayed, impeded and obstructed the investigation of the Benghazi Battle.

Specific conduct includes: (1) failing to adequately secure the US Consulate and the CIA annex in Benghazi; (2) failing to send a response team to rescue embattled US citizens in Benghazi; (3) lying to the American people about why the US Consulate and the CIA annex were attacked in Benghazi; and (3) hiding from the media and congressional investigators the Central Intelligence Agency personnel and other wounded US citizens who were on the ground in Benghazi by scattering them throughout the United States, forcing them to adopt new identities and subjecting them to monthly polygraph tests.

Benghazi Battle elements that are under investigation:

On September 11, 2012, the anniversary of the September 11, 2001, the US Consulate and the CIA annex in Benghazi, Libya was targeted in a premeditated, preplanned attack launched without warning by Islamist militants.

Footage of the attack broadcast in real time showed armed men attacking the consulate with rocket-propelled grenades, hand grenades, assault rifles, 14.5 mm anti-aircraft machine guns, truck mounted artillery, diesel canisters, and mortars.  It was not an act of savage mob violence, nor a spontaneous protest in response to an anti-Islamic video on YouTube.

He has disclosed secret grand jury material by exposing the existence of a sealed indictment of one of the Benghazi attackers in violation of  Rule 6(e) of the Federal Rules of Criminal Procedure that clearly states: “… no person may disclose the indictment’s existence except as necessary to issue or execute a warrant or summons.’’

He has authorized and permitted the Bureau of Alcohol, Tobacco, Firearms and Explosives, a division of the Justice Department, to conductOperation Fast and Furious, wherein guns were sold to Mexican drug trafficking organizations that were used to kill innocent Mexican civilians and two rifles sold to a smuggler in January 2010 ended up at the scene of the murder of U.S. Border Patrol Agent Brian Terry in December 2010.

He has authorized and permitted confidential income tax returns information from the Internal Revenue Service to be provided to unauthorized individuals, organizations and agencies.

He has caused investigations and audits to be initiated or conducted by the Internal Revenue Service in a discriminatory manner, including harassment and intimidation of conservative, evangelical and Tea Party groups applying for non-profit status between 2010 and 2012.

He has (1) authorized and permitted the National Security Agency to conduct or continue electronic surveillance of over 300 million average Americans; (2) given access to National Security Agency surveillance data to other intelligence units within the Drug Enforcement Administration, the Secret Service, the Department of Defense and the Department of Homeland Security in violation of the law; and (3) conducted the surveillance of average Americans unconstrained by Congress, the United Supreme Court or the US Foreign Intelligence Surveillance Court which has, to this date, functioned as a rubber stamp, having approved every request made of it in 2012 and rejecting only two of the 8,591 requests submitted between 2008 and 2012.

He has authorized and permitted the Department of Justice to wiretap and secretly obtain two months of telephone and e-mail records of Fox News Reporter James Rosen and over one hundred Associated Press journalists.

He has thwarted Congress by (1) failing to enforce all or parts of laws duly enacted by Congress, including the Defense of Marriage Act, the No Child Left Behind Act, and the Affordable Care Act; and (2) after Congress refused to pass his Dream Act,unilaterally issuing an executive order directing immigration officers to no longer deport an entire class of illegal immigrants who came here as children, regardless of individual circumstances, and to give them work-authorization permits.

He has intimidated whistleblowers and brought twice as many prosecutions against whistleblowers as all prior presidents combined.  Egregiously, while refusing to prosecute anyone for actual torture, he prosecuted former Central Intelligence Agency employee John Kiriakou for disclosing the torture program.

Wherefore Barack H. Obama, aka Barry Soetoro, by such conduct, warrants impeachment and trial, and removal from office.

By mail only (NBRA specifically asks: “No Donations Please):