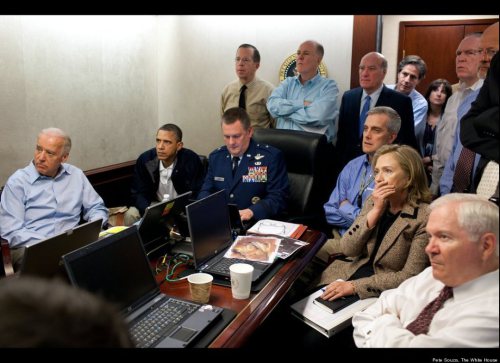 In May 2011, the White House released the above photo when it declared, with great fanfare, that a team of Navy SEALS had broken into Al-Qaeda mastermind Osama bin Laden’s secret compound in Abbotabad, Pakistan, and assassinated the nefarious terrorist. The picture supposedly was taken in a “Situation Room” in the White House, where Obama and his key military and civilian advisers watched, in real time, the take-down of Osama.

Obama had always maintained that he watched the raid in real time in the Situation Room with members of his national security team. In fact, a year after the raid, the POS told NBC News “This was the longest 40 minutes of my life,” referring to the amount of time the Navy SEALs had to complete their mission after landing at the bin Laden compound in Abbottabad.

At the time when the pic was released, many of us gleefully observed how dwarfed Obama appeared, like a chipmunk in a small chair, next to the other individuals seated around the table.

A year later, Swedish news agency Afton Bladet was the first to cast doubt on the authenticity of the photo. Then, Mara Zebest – a graphic artist and co-author for a number of Adobe product books, including the Inside Photoshop series, which has been published in at least ten different languages around the world — also expressed skepticism about the pic, noting a number of anomalies — including the dwarfed Obama — which point to the pic having been “manipulated.” (See “Is the Obama ‘Situation Room” photo a fake?“)

We now have the testimony of a percipient witness (or eyewitness) that Obama indeed was not in that Situation Room.

He is none other than Reggie Love, 32, who has worked for the POS as a personal assistant since Obama was a junior senator, and continuing as his personal aide and “body man” in the White House.  At the end of 2011, Reggie left the White House  to complete his MBA at the University of Pennsylvania’s Wharton School, but he’s still seen with the POS on occasions.

Last month, July 2013, Reggie was invited to a forum in Los Angeles hosted by the D.C.-based Artists and Athletes Alliance to reflect on his time as one of Obama’s closest aides — a “private briefing on decision making in the Oval Office.” The forum was moderated by Jim Newton, editor at large of The Los Angeles Times.

Reggie said he and Obama played cards during part of the raid: “Most people were like down in the Situation Room and [President Obama] was like, ‘I’m not going to be down there, I can’t watch this entire thing.’”

So Obama, Reggie, White House photographer Pete Souza, and another Obama aide Marvin Nicholson, gathered in the private dining room to play a couple rounds of cards. “We must have played 15 games of spades,” Reggie said.