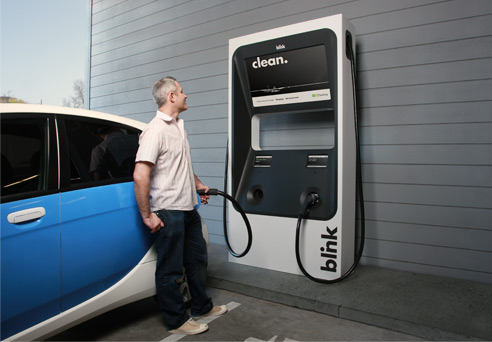 In keeping with their practice of throwing money at nearly bankrupt green energy companies, the Obama administration dumped 100 million dollars into a nearly bankrupt company named Ecotality.  At the time the grant was given to Ecotality, they were nearly bankrupt, but the executives were offered 1 million dollars by their Chinese partners if they could secure free government money.  It turned out to be a slam dunk.

Ecotality makes Electric Vehicle Service Equipment (EVSE), mostly electric car rechargers, like those that used to be found in Costco stores before the lack of use convinced the bosses there that they were a waste of valuable parking spaces.  I may not be a genius but it seems to me that until people actually start buying electric cars, the charging equipment just might be a waste of time and money.

One of the questions I have is this, if the Chinese partners originally saved Ecotality with an infusion of money to set up a subsidiary in China, how much of that 100 million found it’s way to China?  After all, the Chinese must have had a really good reason for offering that million dollar bonus.  My second question is, why would you simply give a dying company 100 million dollars?  In every failing company, the executives who run it are generally a large part of the failure by not developing a strong and educated business plan.

That’s really the reason that most green companies fail.  It’s a false religion and all decisions are based on two things.  One is that global warming is real and two that the average citizen buys into their ideology.  But they don’t.  As science systematically is tearing the global warming models apart, one by one, the average citizen, who is worried about their jobs and their families, could care less about saving the earth by following a liberal red herring.

The Obama mafia likes to point out that they cut off Ecotality’s funding when they became convinced it was a lost cause, and they did.  But not until Ecotality drew down 96 million of the 100 million allotted.  Liberals should quit worrying about the clown at the Missouri state fair and begin worrying about the one in the oval office.