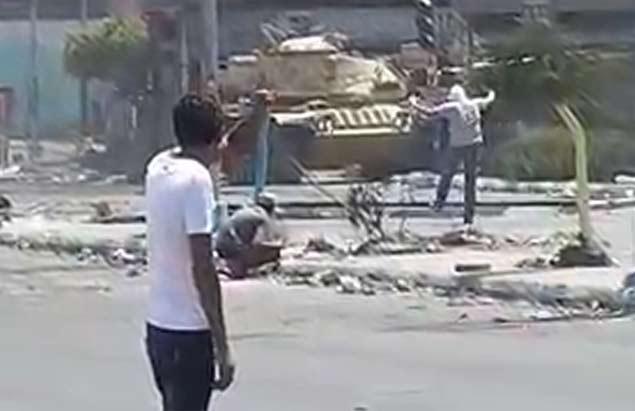 I think that many Americans fail to understand the complexities of the situation in Egypt. Much like Syria, it seems to be a situation where there is not clearly a good side to support. Earlier in the week Rand Paul asked a fairly worthless question. The qu

estion will not get an answer. But after seeing his attempt to stop funding Egypt defeated by a huge margin in the Senate, Rand Paul had to call out his peers:

“This is something that those who voted in Congress are going to have to live with,” Paul told The Cable on Thursday. “The question is: How does their conscience feel now as they see photographs of tanks rolling over Egyptian civilians?”

Rand is assuming that fellow members of Congress have a conscience. This is one of the reasons that Paul has developed a following. He brings energy and wears his heart on his sleeve. I don’t always agree with his takes, but he has a conscience and I believe he is a good man.

AFTER his comments, a YouTube video was released that shows exactly the sort of thing Rand Paul is talking about. Egypt is not China. There will be no second coming of “Tank Man,” at least not with the same ending. There will not be a “Pots and Pans” rebellion here as there was in Iceland. This is not about “democracy” as we know it. This is war.

Votes are most accurately cast through the barrel of a gun here.

The Egyptian military may currently be popular with the masses but that does not make them any less brutal than Morsi and The Muslim Brotherhood. As I already mentioned, in places like Egypt and Syria, it is hard to tell who the good guys are. The truth is that there aren’t any clear-cut good guys and that is exactly why we shouldn’t be sending American tax dollars there.

The following video is fairly graphic. We don’t know the name of the “Egyptian Tank Man” and we don’t know if he survived this. But what we do know is that he stood unarmed against a tank and lost.

Pick sides all you want and you will likely be supporting questionable leadership in Egypt. I said when this started that these people were not heroes. Morsi is a really bad man that was overthrown by other men who aren’t necessarily good.

I leave you today with “Egypt’s Tank Man.”

So what is the answer America? I don’t know but I certainly don’t want to see my tax dollars funding this stuff. We would be much more helpful to send prayers rather than money. Just my opinion.