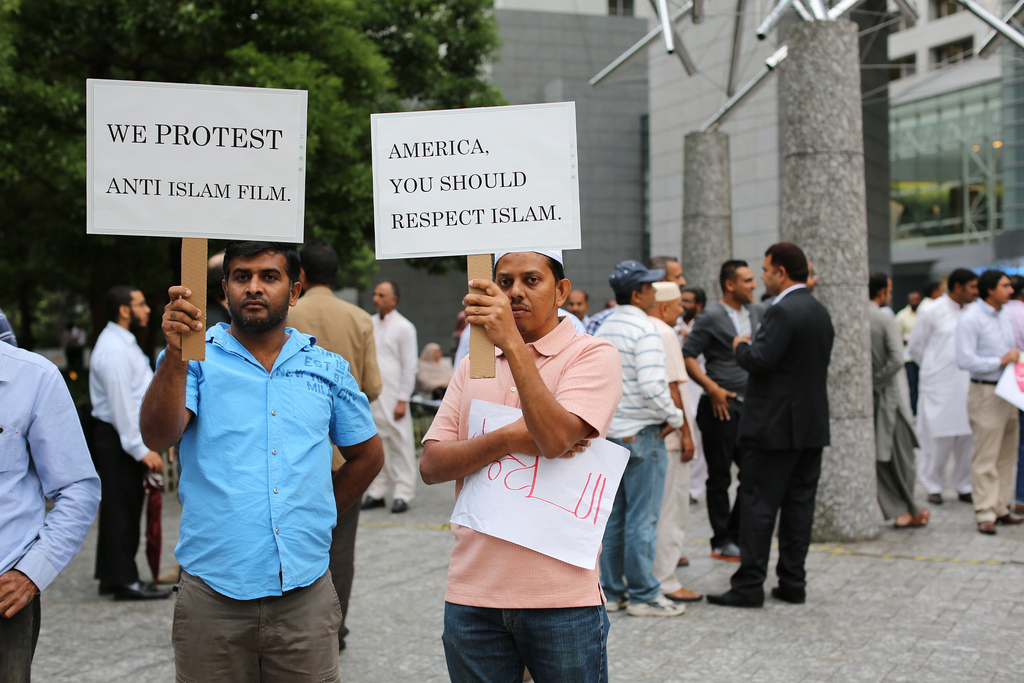 Like many Americans before 9/11,  I was always willing to give Muslims a fair shake.  That was based on knowing and liking many people of the Muslim faith. I worked with them in New York and one couple I got to know well even traveled from New York to Baltimore to attend our wedding in 2007, giving us a rather extravagant gift. I would never suggest that these friends of mine would like to kill me or to take over America.  This couple have lived in the US since 1962 and have worked and raised a family here, always respecting our way of life and abiding by all of our laws. The woman in the couple has been a friend of mine for years and has praised America, as did my French born father, for being the most wonderful land on earth because of its freedom and its opportunities. My friend is an enthusiastic American citizen. Her children were all born and educated here and have been encouraged to love America as she does. She abhorred the events of 9/11 and wept openly at the horror and loss of life.

9/11 was a shock that caused a collision for me between my tolerance of Muslims I had known and the obvious problems presented by what was then being referred to as radical Islam.  I couldn’t reconcile this newly found difference in definition and I tried over and over to figure it out.  As it turns out, my friend helped me.  She explained that she had been educated in Catholic schools in Karachi, where she was born and raised. She admitted to me that it was this upbringing as a child that made her tolerant of and even appreciative of other religions. She even told me once that if she had not been born into a Muslim family and had not been brought up as a devout Muslim, she actually might have become a devout Catholic. She continues to be a devout Muslim, praying the requisite number of times per day, making a pilgrimage to Mecca, as is traditional, and wearing Muslim garb, although she does not wear a burka, telling me that Pakistani women do not often subscribe to this practice.  I am best described as a casual Roman Catholic and several of her friends at work are Jewish, one of whom has attended the weddings of at least two of her children.

I have another friend who has studied the Koran with care and in a detailed way and has told me, using many examples, that if one strips out the elements put in by Mohammed, one is left with a set of religious elements that already existed in Jewish and Christian religions. This relationship between Islam and the Judeo-Christian tradition is well known and spoken of in Islam. Thus, if one removes certain elements such as the dictate that there is no free will but only a demand for obedience and a rule of Jihad, one is left with only what has been drawn from the Old and New Testaments. Thus, Islam is nothing more than a cobbled together set of beliefs from OTHER RELIGIONS.  One might ask why there is even a need for Islam at all when the core is drawn from extant religions that are much older!  This may sound strange, but it isn’t. Think of it analytically.

I agree 100% with the view that the core of Islam is the problem it has with the rest of the world, thus, that Jihad is NOT an aberrant or fringe element, but an integral part of orthodox Islam. As the very sincere and wise man in the video in Dean Garrison’s recent article said, most Muslims in the world just want to live their lives in peace with their neighbors of all other religions and nationalities. However, as Pam Geller has pointed out, the angry and evil Muslims who demand strict orthodoxy, constitute a large enough number that it can and does cause devastation wherever it goes, unless it is tempered by the greater hierarchy of a secular governmental structure and secular civil laws.

I believe that the answer to all of this is the established separation of the secular state and law from the practice of any and all religions in place of civil secular society. If Muslims obey the laws of our land and keep their practice of religion private, as they have done for many years before the advent of our first Muslim president, there would no problem today.  But Obama IS a Muslim, culturally if not in strict practice. Make no mistake about this! Obama was trained in a Madrassa for several years and was brought up from birth as a Muslim.  His conversion to Christianity came about via the very anti-American, antisemitic Jeremiah Wright, who was himself once a practicing Muslim.  Islam does not ALLOW CONVERTS, remember?  But it does encourage what is called Taqia, the dispensation to lie to non-Muslims and to masquerade as a non-Muslim for the purpose of Jihad.  My Muslim friend in New York agrees, by the way, that Obama is nothing BUT a Muslim who disguises his real religious commitment in order to be President.

I am no atheist, nor do I subscribe to the atheistic assault on religion.  However, atheists demand separation of church and state. Yes, they demand it to a degree not even imagined by the founding fathers of our country, and they aim their anger mostly at Christians and Jews. I have heard relatively little anger expressed by atheists against the intention of Muslim domination. Witness the fact that they abhor the existence of a creche at Christmas time school displays, but enthusiastically support the showing of Muslim symbols in the same schools. Yet, the separation of church and state, as a concept embodied in our founding documents, might be the antidote to the poison that is Islamic domination. Even in predominant Muslim countries, such as Gamal Ataturk’s Turkey and the Iran of the Shah, other religions were allowed to practice. In Pakistan, too, where my friend was allowed freely to attend Roman Catholic schools.  This separation of church and state, as we know, is necessary in a free society.  It could, at the very least, be the neutralizing agent we need against the encroachments of Islam upon our America.  I suggest that my Muslim friend in New York would concur.