Tuffy Gessling, the Obama-mask-wearing rodeo clown has been making national news since last weekend for taunting the bulls to run him down. The outrage over this clown is another example of how we are not allowed to criticize our Dear Leader or we WILL be punished. The national outrage aimed at a lowly rodeo clown is of c 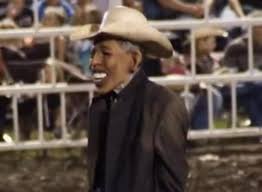 ourse another example of the liberal double-standard which states: when we make fun of conservatives, it is funny; when you fun of Obama, it is racist and you are mean evil bigots! Think back to Chevy Chase’s spoofs of President Ford as a stumbling idiot or the website Filthy Liberal which claims to “educating conservatives a little more every day” posting the Republican Slavery Contract[i], a “satire” which is meant to offend and shame conservatives, but ironically reads much like a liberal entitlement wish list.

A more direct example is the Comedy Central Series That’s My Bush!, which satirized life inside the Bush White House and generally portrayed him as likeable, but a complete idiot who accidentally blows up third world countries while trying to steal cable TV. The New York Times had this to say about the TV show, “That’s My Bush! is a satire of hero worship itself; it is the anti-West Wing and the first true post-Clinton comedy. … This politically astute criticism is embedded in so much hysterical humor that the series never seems weighty.”[ii] Not only do liberals not find this offensive, surprisingly, national women’s groups did not rise up in outrage of the tag line at the end of every show, ”One of these days, Laura, I’m going to punch you in the face!”, but as long as one is making fun of a conservative (who, after all, really are all wife beaters), it is just satire and no one should be bothered. That is unless it is Obama being satirized and the hero worship of the Chosen One being challenged.

Recently, on Sean Hannity liberal commentator Jehmu Greene stated, “…it’s not just liberals that ‘promote hypersensitivity,’ pointing to the backlash the Dixie Chicks received when they criticized President George W. Bush after 9/11.” However, there is a major difference between what happened to the Dixie Chicks and what is happening to Tuffy Gessling.

For those who don’t know or who have forgotten, Dixie Chicks’ member Natalie Maines proclaimed on a London stage that she was ashamed that President Bush was a Texan because of the impending war in Iraq. There was a national outcry. The source of the outcry was from Dixie Chick fans who stopped buying tickets and even burned copies of Dixie Chick CDs. Country radio stations, in solidarity with their audience base, banned the group’s albums. In America, that is an appropriate response; vote with your feet and your pocketbook. The Dixie Chicks paid a price for their freedom to criticize the president. I did not personally agree with Maines and I am not a big country music fan (though I do like folk and bluegrass), but I supported her right to criticize the president and I admired her refusal to back down from what she believed. I even bought their next CD which included the song, Not Ready to Make Nice, just because I support her right to disagree with anyone in America publically. I showed my support with my pocketbook. THAT is the American way!

But in the case of rodeo clown Tuffy Gessling, people have gone beyond voting with their pocketbooks and feet; they have publically lynched this man and destroyed his livelihood. I imagine that the number of rodeo clowns is relatively small in this country. I also imagine that these are not well paid positions. This man’s career is destroyed. Natalie Maines, on the other hand, decided to stay home to be a mother, take a daily hike up the side of a mountain, and live off of her substantial earnings before returning to the stage. Will Gessling ever be allowed to return? Can he just take off some time to heal and live off of his huge rodeo clown earnings?

Another major difference is that no one called for an investigation of Maines. She faced public criticism, but she did not face the NAACP. Breitbart reported on August 13, 2013:

On Tuesday, the Missouri State National Association for the Advancement of Colored People (NAACP) issued a statement asking for federal involvement in the case of a rodeo clown …“The activities at the Missouri State Fair targeting and inciting violence against our President are serious and warrant a full review by both the Secret Service and the Justice Department,” said State President Mary Ratliff. “Incidents involving individuals acting out with extreme violent behavior in movie theaters, schools, churches, political appearances, and outdoor events in general speaks volume to the irresponsible behavior of all the parties involved with the incendiary events at the Missouri State Fair.”

Not only does Ratliff demand official government investigation, Ratliff further demonizes Gessling by lumping him in with the massacres at Aurora and Newtown as is implied by “violent behavior in movie theaters, schools” . Even liberal Greene stated, “It’s ridiculous. The NAACP is out of their dang minds to think that this should be investigated by the Department of Justice.” But that is EXACTLY what they called for. The liberals have no sense of humor or any desire to forgive anyone who criticizes them or their supreme leader. Their standards are always double and they savagely attack anyone that speaks out against them. As Valerie Jarrett said in 2012,“After we win this election, it’s our turn.  Payback time.  Everyone not with us is against us and they better be ready because we don’t forget. The ones who helped us will be rewarded, the ones who opposed us will get what they deserve. There is going to be hell to pay.” Tuffy Gessling is in hell right now.

Finally, Dixie Chicks singer Natalie Maines refused to apologize. She shouldn’t have to and I admire her refusal to do so. Terry Gessling has apologized and that is a shame. He had nothing to apologize for, just as that unfortunate Swiss shop girl who waited on Oprah was made to apologize and should not have. But the liberals try to demand apologies from everyone and thus force shame down the throats of those who have nothing of which to be ashamed. This is the guilt they use to control the narrative. I reject the shame, which I am repeatedly told I should have just because I was born a white American. This of course automatically makes me a racist in the liberal mind.