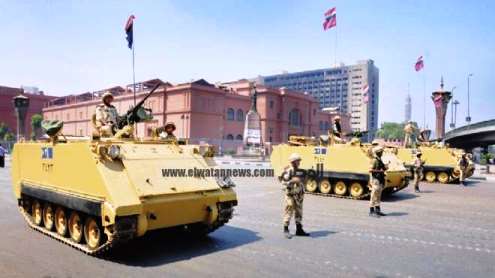 According to a report titled “Sisi to Pentagon: We will not turn back, sovereignty is a red line,” published in Watan newspaper (Saturday, August 15 edition), Egyptian Maj. Gen. Muhammad al-’Assar has just issued a strongly worded letter to the Pentagon, on behalf of the Egyptian military council, saying, among other things, “We will not retreat from fighting terrorism; the military does not run, for the [Egyptian] republic has leadership, and our message is clear: we will not allow red lines to be crossed.”

Regarding U.S. president Barrack Obama’s cancelation of joint military exercises with Egypt, criticism of the military’s crackdown on the Brotherhood, and threats of cutting U.S. aid to Egypt, Watan reported military sources as saying, “The American decision will not influence the course drawn by popular will” — a reference to the fact that the overwhelming majority of Egyptians reject Morsi and the Muslim Brotherhood — and that “the military does not accept any external dictates and will not permit any nation to support terrorism in Egypt,” a reference to the fact that U.S. support for the Brotherhood is support for terrorism.

Military sources reportedly also told Watan news that contact with the American administration has completely ceased, though it remains open with the Pentagon, “which informed the Egyptian side of its fears concerning [Egypt’s] closeness to Russia.

This article originally appeared on RaymondIbrahim.com Reprinted with permission.