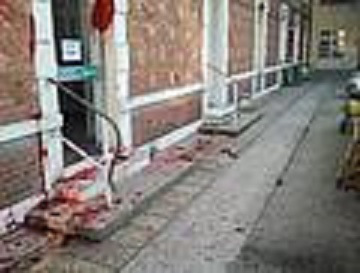 Radical homosexuals demand not just tolerance, but complete approval from society. However, like everything about the Left, their demand is yet another example of their self-serving and hypocritical modus operandus, “Do as I say, not as I do.”

On the night of August 4-5, 2013, members of the homosexual activist group, AIDS Coalition to Unleash Power (ACT UP), vandalized the office of the Jérôme Lejeune Foundation in Paris. Doctors and patients of the foundation discovered insulting posters, condoms strewn around, and blood-red paint thrown against walls, doors, and windows.

Jérôme Lejeune Foundation was established in 1996 by the family of pro-life geneticist Jérôme Lejeune (1926-94) as a continuation of his research into genetic disabilities. The foundation also offers concrete help to patients and their families, as well as works towards a greater protection of unborn children.

The foundation’s president, Jean-Marie Le Méné, said about the vandalism: “I denounce this most outrageous act of intimidation, as it relates to medical space welcoming people with intellectual disabilities and their families. It is always easier to attack the weakest and take them as a scapegoat.”

Act Up is heavily funded by France and justifies its attack by saying that the Jérôme Lejeune Foundation was homophobic for supporting the “Manif Pour Tous” (March for All) – a French mass movement against the legalization of gay marriage and gay adoption. In January 2013, 1.4 million Manif Pour Tous protestors peacefully marched in Paris. French police tear-gassed and beat the protestors with batons, including children, the elderly, and priests.

Founded in March 1987 by homosexual activist Larry Kramer at the Lesbian and Gay Community Services Center in New York, ACT UP is notorious for its attack and vandalism against St. Patrick’s Cathedral in New York.

On December 10, 1989, ACT UP launched the first “Stop the Church” protest against the Roman Catholic Church’s opposition to homosexuality and abortion. Some 4,500 protestors — many dressed as clowns, Catholic bishops, and even Jesus Christ — gathered at St. Patrick’s Cathedral during Mass, chanting slogans and laying down in the aisles.

One protestor desecrated the Holy Eucharist — the Body of Christ — by breaking the wafer and throwing it to the floor.

Police arrested 111 protestors, but filed only minor charges. The protestors were sentenced to community service; those who refused were tried but did not serve jail time.

Dr. Eowyn is the Editor of Fellowship of the Minds and a regular contributor to The D.C. Clotheslines.