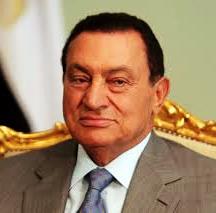 In a video of Hosni Mubarak when he was still Egypt’s president, the strategies of which he accuses the Muslim Brotherhood have come to pass.  What follows are Mubarak’s words from a conference in Egypt (date unknown; author’s translation):

So they [Brotherhood and affiliates] took advantage of the economic situation by handing out money,  to one man 100 Egyptian pounds, or about $30 dollars, [saying,] “Here take this bag of glycerin and throw it here,” or do this or that—to create a state of instability in Egypt.  And these groups—don’t ever believe that they want democracy or anything like that.  They are exploiting democracy in order to eliminate democracy.  And if they ever do govern, it will be an ugly dictatorship. ….  Once a foreigner [likely a Westerner] told me, “Well, if that’s the case, why don’t you let them form parties?”  I told him, “they’d attack each other.”  He said, “So let them attack each other.”  I came to understand that by “attack each other” he thought I meant through dialogue.  For years we’ve been trying to dialogue with them, and still are.   If the dialogue is limited to words, fine.  But when the dialogue goes from words to bullets and bombs…  [Mubarak shakes his head, and then gives anecdotes of Egyptian police and security being killed by Brotherhood and affiliates, including how 104 policemen were killed in 1981, and how one officer was shot by them trying to save a boy’s life.] The point is, we don’t like bloodshed, neither our soldiers nor our officers.  But when I see that you’re firing at me, trying to kill me—well, I have to defend myself!  Then the international news agencies go to these [Islamist] groups for information, and they tell them, “they’re killing us, they’re killing us!”  Well, don’t you [news agencies] see them killing the police?!  I swear to you, not one of the police wants to kill them—not one of us.  Then they say, “So Mr. President, you gave orders to the police to open fire indiscriminately?”—I cannot give such an order, at all.  It contradicts the law.  I could at one point be judged [for it].

Whatever one thinks of Hosni Mubarak—and his final assertion concerning himself is especially prophetic—he certainly understood the Brotherhood and their strategies well.  Consider especially the following three points he made about them and how they have all proven true:

Finally, consider Mubarak’s exchange with “a foreigner,” most likely an American or European, who instantly interpreted Mubarak’s “they’d attack each other” in Western political terms of “dialogue.”  This habit of projecting Western approaches onto Islamists—who ironically represent the antithesis of the West—is one of the chief problems causing the West to be blind to reality, which must ever and always be articulated through its own paradigm, one that insists that violence is always a product of political oppression and that Islamists are perpetually misunderstood victims.

In Egypt, however, one soon learns that, when “dialogue” doesn’t go the Islamists’ way, it’s back to terrorism.  This requires a more realistic approach, or, in the words of Mubarak, a man who, like his predecessors, especially Gamal Abdel Nasser, is intimately acquainted with the Brotherhood: “when I see that you’re firing at me, trying to kill me—well, I have to defend myself!”

This article originally appeared on RaymondIbrahim.com Reprinted with permission.