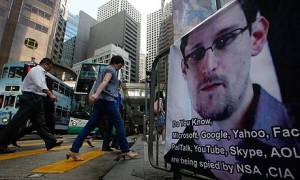 Barack Obama has once again demonstrated his utter contempt and disdain for the American people. Recently he claimed to revamp the National Security Agency’s (NSA) surveillance activity prior to the leaks made by whistleblower Edward Snowden. In reality, Obama was accelerating the spying and diminishing oversight and review.

Remember last week’s press conference, where President Obama insisted that he had already kicked off the process of a major review of the way we do intelligence and surveillance in this country — and about how he was going to set up an “outside” review group to look all this over? The same review group that will be set up by and report to James Clapper (but, the White House assures us, not run by him)?

Right, so a few people pointed out that President Obama already has an independent group that’s supposed to do that thing: called the President’s Intelligence Advisory Board (PIAB). There’s just one tiny, tiny problem in all of this. It now appears that, back in May, just before all the Snowden stuff started coming out, it appears that the administration basically kicked nearly everyone off of the PIAB board. It went from 14 members down to just four. And those members were basically asked to leave:

“They kicked me off,” said former Rep. Lee Hamilton (D-IN). “I was on it a long time under Bush and under Obama. They wanted to make some changes.”

“I don’t know anything about whether they’ve brought in new members. They thanked me and that’s about all I know,” added Hamilton, widely known for his service as vice chairman of the 9/11 Commission.

[….] Philip Zelikow, who served as executive director of the 9/11 Commission and later as a top aide to Secretary of State Condoleezza Rice, was also asked recently to step off the PIAB.

“I’ve resigned from the Board, one of ten of the fourteen earlier members who have done so,” Zelikow said via email. “Four of the earlier members have remained, pending a reconstitution of the Board at some point for the balance of the President’s second term. The White House website displays the current situation, pending that.”

So where is all that transparency that Obama promised? Apparently it hasn’t been seen. Instead of making sure NSA was doing what it should be doing, Obama removed 10 of 14 advisory board members! That my friends was purposeful, not a sign of incompetence. The man knows exactly what he’s doing. Let’s not make excuses for him in these matters.

Furthermore, the Washington Post is now reporting that new documents confirm what we knew all along; the Obama administration, via the NSA, were spying on Americans unlawfully, making denial an impossibility.

The National Security Agency has broken privacy rules or overstepped its legal authority thousands of times each year since Congress granted the agency broad new powers in 2008, according to an internal audit and other top-secret documents.

Most of the infractions involve unauthorized surveillance of Americans or foreign intelligence targets in the United States, both of which are restricted by statute and executive order. They range from significant violations of law to typographical errors that resulted in unintended interception of U.S. e-mails and telephone calls.

Some lawmakers called Friday for greater transparency in the surveillance operations of the National Security Agency, while U.S. officials stressed that any mistakes committed by the agency were not intentional. The contrasting reactions came after The Washington Post reported that the NSA violated rules or overstepped its legal authority thousands of times in recent years.

The documents, provided earlier this summer to The Washington Post by former NSA contractor Edward Snowden, include a level of detail and analysis that is not routinely shared with Congress or the special court that oversees surveillance. In one of the documents, agency personnel are instructed to remove details and substitute more generic language in reports to the Justice Department and the Office of the Director of National Intelligence.


Other instances of abuse are listed in the Post’s article. The question now has to be asked, when will Congress bring articles of impeachment against this usurper in the White House and when will they also rein in the power of the NSA? If you would like to apply a little pressure to your representative of the NSA violating American’s constitutionally protected rights, you can click here to send them a message.