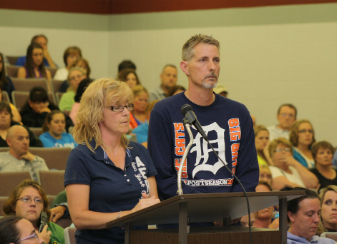 Recently, I wrote a story about a young man who was abused by his teacher.  To make matters worse, 6 present teachers, 2 former teachers, and a sitting member of the Board of Education, all wrote letters asking for leniency.  And believe it or not, his bail was paid for by a church right down the road from the Janczewski’s.  The story continues and it’s not a pretty one.

The first thing you need to know about this family, is all the bad luck they have suffered.  The Janczewski family has had enough trial and tribulation to last a lifetime.  The mother has cancer, the father has multiple sclerosis, and the son was sexually abused.  After the teacher, who is such a lowlife, his name will not appear here, was sentenced to 15 to 30 years in prison, they went after the six current teachers and the board member (who is married to one of the teachers) in order to get them fired.

Then one night, an explosion went off outside and Mr Janczewski went to the window, only to see his garage on fire.  His camper and the side of his house were also damaged.  The liberals have their gay marriage now and have their sights set on pedophilia now.

Glenn Beck interviewed him on his show today and offered help from his charity, Mercury One, that he said could at least rebuild the garage.    Janczewski found two sets of letters painted on the side of his house.  They were “YWP” and “ITY”.  Janczewski thinks they stand for, “You will pay” and “I told you”.  Despite what some people in town are doing and saying, Janczewski says the majority of the community has been very supportive.

The school is caught between a rock and a hard place.  Parents say if the teachers aren’t fired, they will pull their kids out of the school and if they do fire them, they will undoubtedly sue.  The cash strapped school will be financially strapped no matter what they do.  Since that is true, then they should do the right thing and fire the six teachers and recall the school board member.