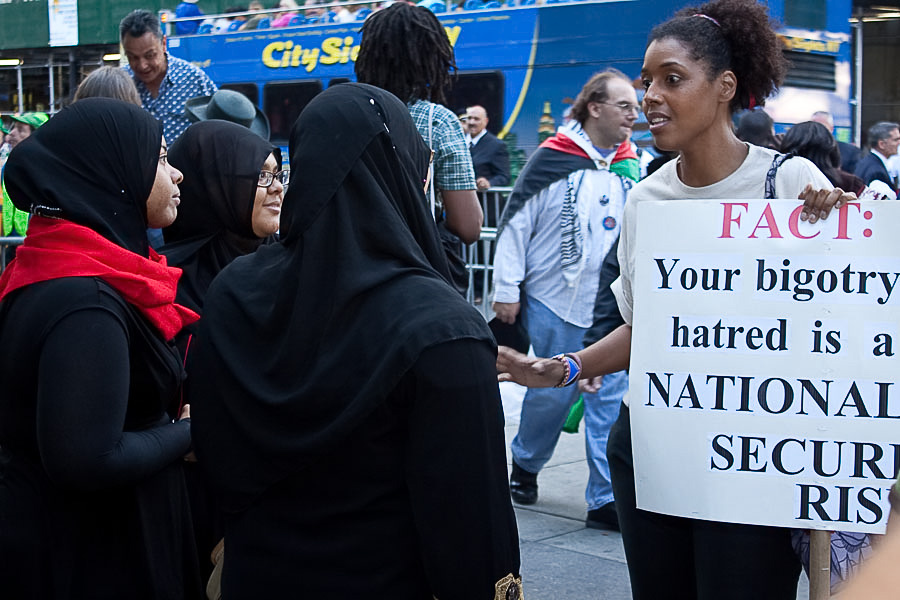 AMPAC, the American Muslims Political Action Committee, a Muslim advocacy PAC, is planning a “million Muslim March” on Washington, D.C. The timing of their march is as orchestrated as the September 11, 2001 attacks on America and the September 11, 2012 attacks in Benghazi. They will be holding their march on September 11, 2013, but as you will see they seem to be engaging in a bit of taqiyya as to what the entire event is about.

The group is demanding, “that laws be enacted protecting our 1st amendment. We are asking President Obama to fulfill his promise from his first campaign for Presidency of a transparent government. Lastly, we are asking for the release of the 9/11 commission report to the American people,” the event posting states on their website.

They will be rallying at 12 noon on September 11, 2013 on the National Mall, then the Congress, the Supreme Court, and the White House “to hold truth to power at the three major branches of American government.”

While I agree with their statement that following 9/11, “the United States government as failed to protect and promote Constitutional liberties and human life, here and abroad,” I cannot stand shoulder to shoulder with these groups who would not speak out against jihad. In fact, several of the groups and individuals in them have been supportive of jihadist causes and make excuses for their actions.

This group of Muslims is just like the homosexual community. They are demanding “special rights.” They want to impose Sharia law, and they want the federal government to help them do it. This is why the feds have already begun to threaten the free speech of others in favor of Islamists, including threats of federal prosecution and imprisonment for speaking out against Islam. Thank God, people in the United States are standing up to the tyrannical actions of the federal government when it comes to intimidating those who would speak the truth about Islam while pro-Muslim groups like the Council on American-Islamic Relations (CAIR) praises the efforts of the Obama Justice Department to silence its critics.

AMPAC’s Chief of Operations Isa Hodge writes that Muslims and non-Muslims alike were traumatized by the Sept. 11, 2001 terrorist attacks, “but we as Muslims continue 12 years later to be victimized by being made the villains.”

“Yet our Government either sits idly by and does nothing to protect our freedoms or it exacerbates the problem with its constant war on terrorism in Islamic countries, congressional hearings on Islam in America, and its changes to the NDAA law.”

“These lies told to the American population has made it impossible for us to do true dawa,” Mr. Hodge continues.

One has to ask, is making it impossible to engage in dawa (Islamic proselytizing) a terrible thing? I think not.

“It is time for us as Muslims in America to stop being defensive and start being proactive by using our right to vote and our freedom of assembly and let our voices be heard by our country and the world. Stand with us help us fight the injustices being committed against us.”

Interestingly enough, outlets covering this event, have failed to refer to AMPAC for what it is, and they are intentionally leaving out “Muslims” in the title. For instance, the Washington Post refers to AMPAC as “The American Political Action Committee.”

The event lists the participants and sponsors of the march.

On Friday, AMPAC changed the name of the march. USNews reports:

Media coverage of the event, scheduled for the 12th anniversary of the 9/11 terrorist attacks, exploded earlier this week. Hodge said he’s irritated that many reports used the original name, which he says was changed in February after the addition of groups that doubt the official account of the 2001 attacks.

“They’re focusing on what it was [called] before February to continue the misinformation and fear that we’re trying to stop,” Hodge said. “It’s more sensational if they can put out there that it’s just Muslims going to dance on the graves of the 3,000 souls that were lost that day. That’s not what we’re doing.”

Protesters will instead take to the National Mall to denounce government surveillance and call for “the truth” about the attacks, Hodge says.

Look, I don’t think we’ve gotten the complete story behind 9/11, but even AMPAC’s Facebook page, which cites this article, starts engaging in taqiyya. They wrote on Monday:

This event is not about 911 truth, and it’s not about Muslims being targeted, or even the NDAA…it’s about more than that. It’s about a day, a national tragedy, regardless of the culprits. That has been used to justify or excuse, every erosion of our liberties in the past 12 years. From the Patriot Act, and the NDAA, to police militarization, and the national security state. MAMAF is about people. who are sick and tired of a corrupted government making slaves of free people.

Confused yet? They have gone from stating this was about the First Amendment, to engaging in “damage control” due to the name of the march, and now there are conflicts over what the entire thing is even about. Is it about 9/11 truth? Is it about free speech? Is it about the NDAA? Is it about Muslims being targeted? Apparently it’s all of it and none of it. Seriously, Islamists cannot be trusted, and these statements demonstrate that. Given the event pages, I’m highly doubtful we’ll be seeing many participants at this little gathering.