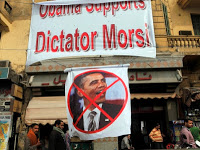 While White House spokesman Josh Earnest continues to publicly deny that the US has cut off aid to Egypt, the office of Senator Patrick Leahy (D-VT), the head of the Appropriations State and Foreign-Operations Subcommittee, claims that military aid to Egypt has indeed been temporarily cut off as the State Department admits that our government still has NOT delivered $585 million in Egyptian aid, about half of the total promised $1.5 billion aid package, for the fiscal year ending on September 30th.

Claiming that the Obama administration is reviewing its options in regards to Egypt, Leahy said that administration lawyers decided it was best “to observe the law restricting military aid on a temporary ‘day-to-day’ and ‘case-by-case’ basis” (by the way there is NO such law), deciding that the (non-existent) law did not require a public announcement on whether an actual coup had taken place (but acting as if it did)…which would have immediately required a cutoff in aid under our laws and has become a sticking point both here in the US and in Egypt itself.

Yet by suspending direct military aid…meaning weapons and certain types of economic aid…aid desperately needed to help the Egyptian military disband and bring to justice the Muslim Brotherhood…this most vile of American presidents has now allowed the door to be left open for the Muslim Brotherhood’s return if NOT to direct power to at least becoming an ongoing insurgency who will join ranks with al-Qaeda (and to some degree they already have) and try to turn Egypt into a failed state.

And if that happens, Barack HUSSEIN Obama built it and owns it.

Remember also that Obama recently canceled the joint US/Egyptian military exercises that had been set for next month (exercises desperately needed because of the rise in violence in the Sinai Peninsula, an area critical to keeping the peace with Israel as laid out in the Camp David Accords), and that the Pentagon, on Obama’s orders, has held up the transfer of the remaining promised F-16 fighter jets to the new temporary Egyptian government but had NO problem sending them to the Muslim Brotherhood ‘puppet’ government of Mohamed Morsi.

And so this man has once again shown his true colors as to where his loyalties lie…for they lie NOT with the Egyptian people and the Egyptian military who are trying to rid their country of those who expound sharia law under a strict islamic doctrine…Barack HUSSEIN Obama’s loyalties lie with the very group destroying Coptic Christian churches all across Egypt shouting ‘allah-hu akbar’ as they do so. 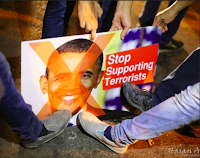 And now with the Egyptian military announcing that they’re NOT only going to protect the Coptic Christians but rebuild every Coptic church burned and destroyed by the Muslim Brotherhood (which will NOT only assure Christian support for the military, which they already have for the most part, but will also send a powerful message to western Christians that the military is indeed the protector against radical islam), our so-called ‘Christian’ president is turning his back on what should be his Christian brothers, and is going to stop supporting the Egyptian military simply because they’re in control and NOT his beloved Muslim Brotherhood.

I guess it’s ‘once a muslim always a muslim’…and NO attending Mr. G-D America’s church for 20 years will prove otherwise.

And all this proves that Barack HUSSEIN Obama’s foreign policy in regards to Egypt…in fact in regards to the entire Middle East…is tantamount to his voting ‘present’ while in the Senate…as in this man has NO clue whatsoever of the damage to the cause of Egyptian freedom he’s doing or if he does he just does NOT care. This man and his misguided policies are turning Egypt into another Iran of sorts…the kind that would make Jimmy Carter proud…and that is dangerous and sad indeed, because he still will NOT admit that islamic terrorism is the root cause of all the problems.

And make NO mistake that the Egyptian military is fighting islamic terrorism (‘islamic terrorism’… two words Obama will NEVER say let alone admit to existing)…terrorism of the worst kind for it’s in-your-face terrorism…announced with fanfare as in the Day of Rage, and executed to inflict as much carnage and death as possible (weapons were found at the two sit-ins that were dismantled and destroyed by the military)…terrorism of the kind that is the hallmark of al-Qaeda.

In fact, and something NOT generally known is that the military has already arrested and taken into custody the brother of al-Qaeda chief Ayman Al-Zawahri.

And the military under General Abdel Fatah al-Sissi is trying to roundup and arrest as many of the Muslim Brotherhood and other terrorist leaders (including al-Qaeda leaders) as possible in an effort to reign in both the violence and rising death toll for they know that if a country has a large radical islamic population then the only government that can keep a semblance of stability is having the military in control, because it’s been proven time and again throughout the Middle East that a secular democracy as we know it and radical islam cannot and will NOT ever be able to exist peacefully together.

And that’s why Barack HUSSEIN Obama needs to butt out of Egypt’s affairs for the last thing Egypt needs right now as they’re on the cusp of freedom is an islamic terrorist supporter telling them what they must do to run their own country…especially since the Saudis, who are also against the Muslim Brotherhood, have promised to make up any aid to Egypt that Obama cuts.

And so the nightmare that is currently Egypt continues…