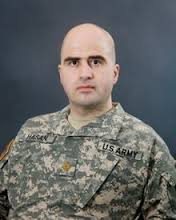 Well it didn’t take long. Major Nidal Hasan has been convicted of premeditated murder for his shooting jihad in 2009 at Fort Hood, which left 13 dead, and more than 30 wounded. He was found guilty on all 45 charges of premeditated murder. The verdict came after only six hours of deliberation by a 13-member panel of high-ranking officers who voted unanimously to convict Hasan. This makes him eligible for the death penalty.

Military jurors found the Army psychiatrist guilty on Friday for the attack that killed 13 people and injured more than 30 others at the Texas military base.

The trial now enters a penalty phase, where prosecutors will ask jurors to sentence Hasan to death.

Hasan is acting as his own attorney. But he didn’t call witnesses or testify, and he questioned only three of prosecutors’ nearly 90 witnesses.

Previously, I asked why the trial would continue over a long period of time. I guess the result, obviously not of my questioning, was that since Hasan had confessed to the shooting, there wasn’t much need of a trial.

However, we also reported that the attorney for the Ft. Hood victims said that Barack Obama and the Army were working to put the kibosh on evidence that would expose Hasan’s jihadist mentality, in spite of the prosecutions claims.

“The accused went out that day to kill as many soldiers as he could … or anybody else who tried to stop him,” prosecutor Col. Steve Henricks said.

“The accused, without a doubt, held a premeditated design to kill,” he added.

It is interesting though. One has to wonder if the issue is to keep more evidence out of the public eye concerning the fact that it is Islam and its teaching concerning jihad that is at the center of Nidal Hasan’s murderous rampage. My thought is that it is to keep this incident as “workplace violence” rather than to acknowledge it was an act of terrorism by a jihadist, even though we know what it was. This would keep benefits from being provided to families of the fallen and the wounded.

Nidal Hasan previously attempted to provide a defense claiming that he was “defending the Taliban.”

One thing I do give credit to Major Nidal Hasan on is that he was very clear on what America is at War with. “My complicity was on behalf of a government that openly acknowledges that it would hate for the law of Almighty Allah to be the supreme law of the land,” the 42-year-old Army psychiatrist said. Hasan was then asked if this was a war on Islam. “You bet it is,” he said. “I participated in it.”

The last person to be put to death by the US military following a conviction was Army Pvt. John A. Bennett. Bennett was hanged in 1961 for the 1921 rape and attempted murder of an 11-year-old Austrian girl.