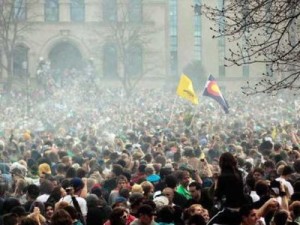 At last, there is a hint that President Obama might someday spend a nickel of his fast-diminishing political capital on reforming marijuana laws.

White House spokesman Josh Earnest addressed marijuana reform at a recent daily press briefing. “The president does not, at this point, advocate a change in the law,” Earnest said, though he added that Obama does not think cracking down on individual marijuana users is a good use of federal resources, either. (1)

What makes this different from the many other measured comments Obama has made on the subject since he took office?

For one thing, the timing is telling. The White House’s comment comes on the heels of the announcement that the Justice Department will no longer pursue mandatory minimum sentences for certain low-level nonviolent drug offenses. Meanwhile, states that have passed legalization laws, especially Colorado and Washington, continue to wait for a clear signal from the Justice Department on how it will respond to the conflict of state and federal law on the issue.

Many have also interpreted the comments as an indirect response to a column by Sanjay Gupta, CNN’s chief medical correspondent. Gupta, a neurosurgeon as well as a former adviser to Hillary Clinton, was reportedly offered the position of surgeon general in 2009, though he withdrew his name from consideration. Gupta’s Aug. 9 column garnered quite a bit of attention – especially as it represented a reversal of his previous position on marijuana use.

“We have been terribly and systematically misled for nearly 70 years in the United States,” Gupta wrote, “and I apologize for my own role in that.” The column explains that Gupta has been since convinced by evidence that cannabis has low abuse potential and legitimate medical applications that can’t be easily duplicated by alternatives. (2)

Legalization advocates hoped that Gupta’s column might trigger a similar reversal – or, perhaps more aptly, an evolution – in the president’s position. After all, the president has already shown that his stance on social issues can turn on a dime once popular sentiment is behind him. (His evolution on marriage equality springs to mind.) I have always assumed that Obama, whose past use of marijuana is no secret, is privately in favor of legalization as long as it doesn’t hurt him politically. This stance has led him to his public position that the government has “bigger fish to fry” than fixing pointless laws rooted in untruth that brand thousands of Americans as criminals every day.

Yet the resources currently spent on pursuing the “war on drugs” on the enforcement side, not to mention the strain on our court system in dealing with the offenders, mean this issue is not as small as Obama has previously suggested. A recent report from the ACLU that focused on the disparity between arrests for possession between white and black offenders also observed that marijuana possession charges make up nearly half of total drug arrests.

Yesterday would not have been soon enough to end this craziness. The federal government has been forced to take a nonsensical stance as it holds two contradictory ideas about marijuana at once – that it is one of the most dangerous drugs available and has no valid medical use on the one hand, and that it is a relatively low-priority issue that states can handle on the other. Holding both ideas is untenable, especially now that state positions have shifted.

The political winds may be gathering enough force to push the president where he ought to be going. This is a chief executive who has the courage of his pollsters’ convictions. Twenty states, as well as the District of Columbia, have voted to approve marijuana for medical applications; two have decriminalized cannabis entirely.

This momentum is going to force the president into a choice sooner or later. It is becoming clearer that he wants to leave the door open to make the right one whenever he eventually decides to step through.

1) Yahoo! News, “Obama does not favor changing pot laws… ‘at this point'”