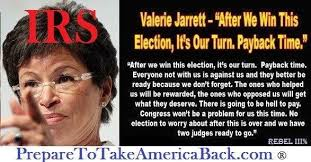 People in Obama’s own White House question why Valerie Jarrett has her own Secret Service detail.  Some claim it’s earpiece envy.  Others claim she is strongly attracted to men who stick their fingers in their ear and talk to their cufflinks.

So why does she need SS protection?  Is her life in danger?  By whom?  Possibly from Obama.  After all, if anything happens to Jarrett, he would become president.   It is rare that an adviser ever gets a detail, even temporarily, but it’s unheard of for one to get a permanent detail.  The Daily Caller sent a FOIA request to the White House for the cost of her protection..  That was in April 2012.  FOIA requests are supposed to be processed within 30 days, even in this, the most transparent government in history.

Did I mention she has a driver?  You pay for that too.  Perhaps some of the tenants that she was the slumlord for are out to get her.  Or maybe a disgruntled relative of one of her and Michelle Obama’s patient dumping scheme at a Chicago Hospital.  More likely, she just wants the prestige of a SS detail.

Jarrett finds questions about her SS detail to be ridiculous and offensive and she refuses to discuss why she has them.  She has had the detail continuously since 2010.  Taxpayers should find her SS detail as ridiculous and offensive.  Imagine what three years of continuous round the clock SS protection must cost.  It’s understandable that the president and the VP get this protection, but why Jarrett?  I mean at the time, she requested the detail, she hadn’t even given the stand down order in Benghazi yet.