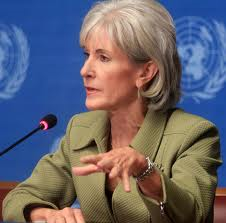 That’s what Kathleen Sebelius said.  Now, wait a minute.  I thought we were told the newly legalized illegal aliens weren’t eligible for Obamacare.  That’s not quite the truth.  Employers do not have to pay for Obamacare for them, but the taxpayers do.  In fact, the Obamacare bill sets incentives for companies to hire these previously illegal aliens because employers save a minimum of $3,000 by not insuring them.  This favors the illegals over American citizens.

The previously illegal aliens will not be forced to buy into Obamacare, but if they do, they are eligible for taxpayer paid subsidies.  Therefore, if they can get free Obamacare, they will apply and if they aren’t eligible, they are not forced to join or to pay the tax an American citizen would.  Americans have now been replaced on top of the food chain, thanks to the liberals.

A 1996 law forbids foreign students and recent immigrants from receiving federal subsidies but the Affordable Care Act has a built in exception, that allows not only the 11.5 million illegals to access it but legal immigrants who just arrive and foreign students, while they attend college.  In 2012, there were 650,000 guest workers and 70,000 foreign students who would all be eligible under the senate immigration bill.

The guest worker program would likely hurt more Americans as companies could bring professionals from overseas here, where they would work for less money than Americans.  Goldman Sachs is already using foreign analysts and many pharmacies are hiring temporary workers from overseas to cut their labor costs.  But don’t worry, Obama will tax your unemployment check to give these people free heathcare.

Steven Ahle is the Editor of Red Statements and regular contributor to The D.C. Clothesline.