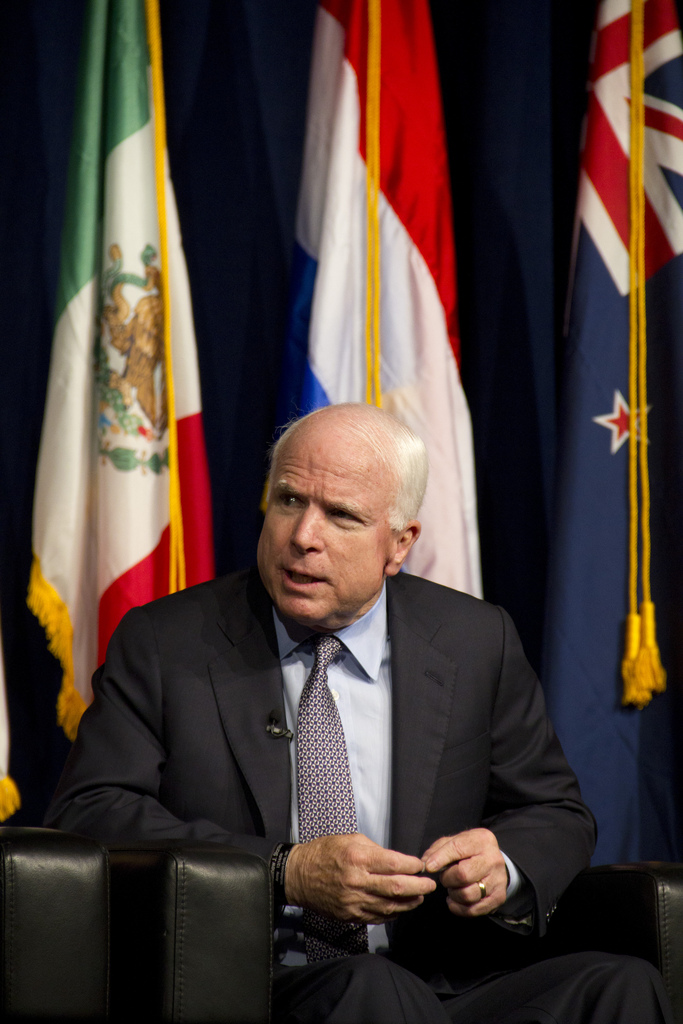 The big story of Tuesday Night was John McCain accusing Obama of giving Assad the “green light” to use chemical weapons. Well played John but I’m not buying it and neither should the rest of America. The Daily Beast broke the story Tuesday Evening and McCain’s rationale looks good but there is a dark side to it that some may not catch. So let’s go through what he said and then attempt to dissect it.

McCain’s argument centered around Obama’s indecision to respond to earlier reported chemical attacks launched by Assad. He basically stated that since Assad had been allowed to use chemical weapons before and nothing happened, that he felt safe in doing it again. Sounds logical.

“Assad was able to use chemical weapons before and there was no response, and so why not do it again? This should surprise no one,” McCain said. “They viewed that not as a red line but as a green light, and they acted accordingly.”

There are three ways to look at this from the conservative side of the aisle. Liberals live in their own world. The first way is the way of John McCain’s lock-stepping “Arizona-Irish Republican Army.” The thought here is that republicans, especially McCain, are always right. End of story. There are those that will rally behind John and accept his take as the full truth. These people are a special kind of stupid.

There is a second group of conservatives who are a little more skeptical. They know that the vast majority of Americans are against our involvement in Syria. They see McCain’s comments and though they may agree, they also remember the numerous times that McCain has sold them out. They may agree this time but they will not forgive McCain for things like the Immigration Bill. And who could blame them? Let’s not forget to embed the obligatory McCain campaign video here. “Complete the Danged Fence John.”

These people know that McCain will do anything to score political points, and though they may agree with him they are not buying that his intentions are pure of heart. These people are cynics. Good for them. They try to think for themselves and America needs more of that.

Then there are people like me who are the “ultra cynics.”

We are not buying this democrat/republican thing anymore. We have watched John McCain kiss Barack Obama’s backside for a long time now. We watch as Obama sends, not two democrats but, two RINO (Republican in Name Only) senators to do his dirty work in Syria and Egypt. We realize that John McCain is Barack Obama’s lap dog.

So how would such lap dog have served the great Obama by making these statements?

Obama will (hopefully) not be facing re-election.

Congress has shown no signs of having the cahonies to make a hard run at an actual impeachment. They talk about it for political points but I think most Americans believe that it’s all talk.

So how would McCain have served Obama with those statements? Because it is quite likely that Assad is not behind this attack. There is a lot of consensus and growing evidence that it was the Syrian Rebels that launched this attack.

So again, how did McCain serve Obama with this statement?

He made a bunch of brainwashed Republicans believe that Obama is still an idiot but at least he is telling the truth about who launched the attack. After all, if John McCain says that Assad did it then it must be true.

As you dig deeper into the dark side of politics you will understand that every statement tends to be part of the advancement of a bigger agenda.

John McCain probably received approval of those comments from Obama and might have even been asked to make them.

America, John McCain is full of sh** and this is just a well constructed propaganda message to take our minds off of the real story which is:

1. Did Syrian Rebels which Obama supports launch this chemical attack, and
2. If they are responsible, did the U.S. and its allies help in the planning or implementation of that attack?

The average American will not be able to sort through the evidence as easily as those at the top levels of government. The best way for us to get a feel for the truth is to watch the reactions of those involved.

It’s quite convenient that this happened during a congressional recess.

The Obama administration seems in a hurry to launch their missiles without further delay. America and its allies all claim to have proof that it was Assad. Vladmir Putin claims to have evidence to the contrary.

I am currently of the opinion that there is more evidence on the side of Putin. I wrote the below article in a rush yesterday and it is far from complete, but it will point you in the direction of where you find more evidence that this was not Assad, but our beloved al-Qaeda linked Syrian Rebels.

Obama knows how dangerous this move is. He knows that Russia will not be happy. He knows that he is risking the lives of millions of Americans by acting against a strong strategic ally of Russia. You would think that a president in that predicament would make sure that he was acting on good intelligence and seek the counsel of Russia to make sure they know that an attack is justified.

Is that not common sense? Again, we won’t always know what they know but you can tell a lot by watching how they react.

Shame on you John McCain. I remember the story of a brave young man who fought for his country without question. He spent a long time incarcerated as a prisoner of war.

That man cared about America and its people. The new John McCain is an accomplice to a man who is risking thermonuclear war falling down upon the land I love. He is also an ally of a man who disgraced American soldiers in congressional testimony.

Have you ever wondered how men like John Kerry and John McCain could end up on the same side? They took very different paths. One played the part of the ultimate war hero and the other played the part of a guy whose horse face matches his personality from the other end of the horse.

And now they support a man who is likely not even an American and who had no intention of serving this country in a capacity where he might do more than chip a nail.

This is the lie of politics. Things are not always what they seem. There is a lot of well orchestrated theatrics. You have to look at what they do and not listen to what they say.

Let’s stop reacting to what these people say and analyze why they say it.

My belief is that this is part of the plan and unfortunately I think it served its purpose with millions of Americans.

Do not give up hope. I believe there are a few, albeit very few, good ones left. They have not yet been indoctrinated into this secret club and for the sake of America I hope they stay the course.

John McCain, on the other hand, is as corrupt as they come. He was busy playing this game while Barry Soetoro was still an Indonesian foreign exchange student.

Full Reprint rights are granted for this, or any of Dean Garrison’s articles so long as author credit and a link back are provided.