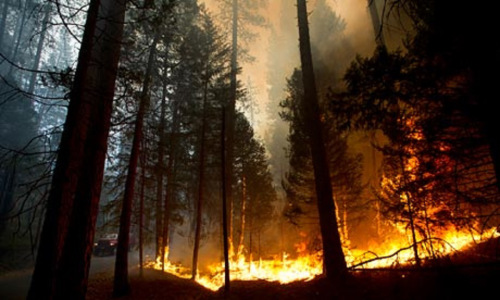 The wildfire blazing in Yosemite National Park is now one of the largest California fires on record.

The so-called Rim Fire (because the fire started at the rim or borders of the park) has charred nearly 184,500 acres – an area larger than the land mass of Chicago – since it erupted on August 17. It ranks as the biggest California wildfire since October 2007, and the 6th-largest in state history. The blaze has reached the shores of a key reservoir that serves as the primary water supply for San Francisco some 200 miles to the west.

Here is an important video of an Economic Warfare panel on July 9, 2012, from the American Center for Democracy.

Speaker William Scott, author of Space Wars and a former NSA official and editor of Aviation Week, said that a subtle form of economic warfare is wild land arson — setting fires in U.S. forests and grasslands.

Among the cache of materials captured by the Navy SEALS from Osama bin Laden’s compound in Abottabad, Pakistan, are the Islamic terrorist group al-Qaeda’s plans, including “a detailed campaign to start fires throughout the [American] West. U.S. officials have determined that some of the fires that burnt in California last year were ignited by al-Qaeda operatives.”

The head of the American Center for Democracy is Dr. Rachel Ehrenfeld, a professional acquaintance. She can be reached at [email protected]

After many days of the Yosemite fire raging out of control, firefighters are finally beginning to gain some ground, with 20% of the fire now contained.

Meanwhile, as some 51 large uncontained wildfires burn across America, the federal government is fast running out of money to fight them — just in time for the peak fire season. The U.S. Forest Service is down to $50 million — enough to pay for only a few days of fighting fires — after spending $967 million so far this year.

But Obama the POS manages to fund $313 million in mortgages for Palestinians in the West Bank! Such are President Lucifer’s perverse priorities . . . .

Please pray for the firefighters, the people who have lost their homes, and for the suffering wildlife of Yosemite National Park.