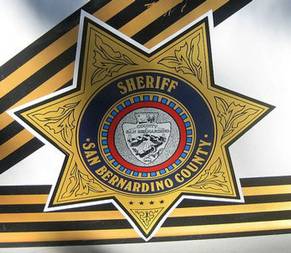 I keep a sword handy in my gun cabinet just in case I should ever need it to thwart a home invasion. Doesn’t everyone? From the files of the truly bizarre comes yet another story you will not likely find in the mainstream media. The police showed up at a house where Montasir Ishag was apparently involved in a bi-polar, meth-induced episode. If you combine a mental condition, drug use and a Muslim, the story could turn out to be very interesting and this case did not disappoint.

A sword-wielding 33-year-old Rancho Cucamonga man charged deputies while hollering “Allah Akbar,” sheriff’s officials say, until the deputies halted him with a blast from a bean bag shotgun.

Montasir Ishag was arrested at 9 p.m. Tuesday, Aug. 27, along the 9400 block of Glenaire Court and booked for investigation of attempted murder of a police officer, jail records show. His bail is $1 million.

Deputies were summoned to the house at 1:26 p.m. by a caller who said his son was under the influence of meth and was having a bi-polar episode, sheriff’s officials said in a written statement.

The caller also said his son had a sword in his bedroom and feared for his safety.

“When deputies entered the front door, … Ishag charged the deputies with a sword, while yelling ‘Allah Akbar,’” according to the statement. “Deputies used a less than lethal shotgun.”

Ishag was taken to San Antonio Community Hospital for treatment of his injuries before being booked.

Again, America needs to start talking about the truth. Crazy Christians, Jews, Buddhists and Hindus commit crimes in America. But the big difference is that when they do it is normally an indication that they have strayed from their religious beliefs.

The opposite seems to be true with Islam. The more a Muslim seems to dive into the teachings of their faith, the more violent they seem to become.

This is Islam and unlike the mainstream media I do not sugar coat the true dangers of this “religion of peace.”