Obama is going to bat — for what?

Obama is alienating world powers — for what?

For the Muslim Brotherhood? For Al Qaeda?

We have no national security interest in Syria…but we are condescendingly told that military intervention is for humanitarian reasons.

In reality, a war between Iran and Al Qaeda/Muslim Brotherhood is good for humanity — let these vicious savages kill each other.

Where is Obama’s humanitarian concern for the 12,000 Christians who have been slaughtered by the Muslim group Boko Haram in Nigeria? He won’t even designate them a terror group.

Syria crisis: Russia and China step up warning over strike BBC August 27, 2013 (thanks to Christian) 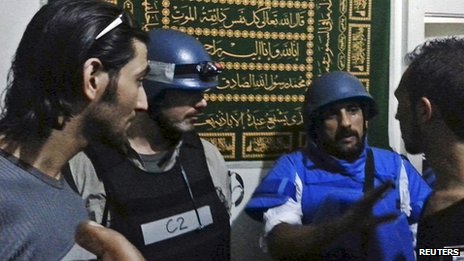 The UN team spoke to witnesses and survivors in Muadhamiya

Russia and China have stepped up their warnings against military intervention in Syria, with Moscow saying any such action would have “catastrophic consequences” for the region.The US and its allies are considering launching strikes on Syria in response to deadly attacks last week.

The US said there was “undeniable” proof of a chemical attack, on Monday.

UN chemical weapons inspectors are due to start a second day of investigations in the suburbs of Damascus.

The UN team came under sniper fire as they tried to visit an area west of the city on Monday.

A spokesman for UK Prime Minister David Cameron says the UK is making contingency plans for military action in Syria.

Mr Cameron has cut short his holiday and returned to London to deal with the Syrian crisis.

Russian foreign ministry spokesman Alexander Lukashevich has called on the international community to show “prudence” over the crisis and observe international law.

“Attempts to bypass the Security Council, once again to create artificial groundless excuses for a military intervention in the region are fraught with new suffering in Syria and catastrophic consequences for other countries of the Middle East and North Africa,” he said in a statement.

Late on Monday, the US said it was postponing a meeting on Syria with Russian diplomats, citing “ongoing consultations” about alleged use of chemical weapons in Syria.

Hours later, Russia expressed regret about the decision. The two sides had been due to meet in The Hague on Wednesday to discuss setting up an international conference on finding a political solution to the crisis.

The Russian deputy defence minister, Gennady Gatilov said working out the political parameters for a resolution on Syria would be especially useful, with the threat of force hanging over the country. 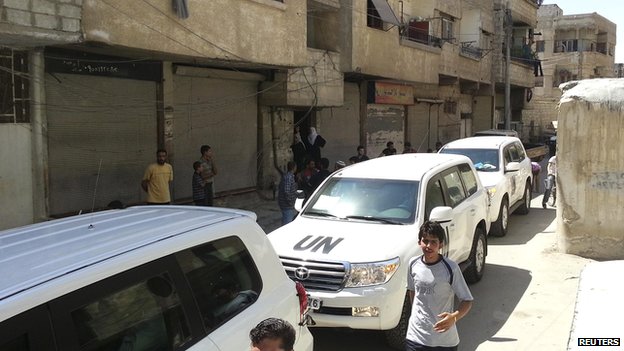 On Monday, Mr Cameron spoke to Russian President Vladimir Putin who said there was no evidence yet that Syria had used chemical weapons against rebels, Mr Cameron’s office said.

The official Chinese news agency, Xinhua, said Western powers were rushing to conclusions about who may have used chemical weapons in Syria before UN inspectors had completed their investigation.

UN visitBoth the Syrian government and rebels have blamed each other for last Wednesday’s attacks.

Medical charity Medecins Sans Frontieres said three hospitals it supported in the Damascus area had treated about 3,600 patients with “neurotoxic symptoms”, of whom 355 had died.

US officials said there was “little doubt” that President Bashar al-Assad’s government was to blame.

UN inspectors spent nearly three hours in the western district of Muadhamiya on Monday where they visited two hospitals and interviewed survivors, eyewitnesses and doctors.

A UN spokesman said they had collected some samples.

Earlier in the day, the UN convoy came under fire from unidentified snipers and was forced to turn back before resuming its journey.

UN Secretary General Ban Ki-moon condemned the shooting and asked the UN team in Syria to register a complaint.

In the most forceful US reaction yet, US Secretary of State John Kerry on Monday described the recent attacks in the Damascus area as a “moral obscenity”.

He said the delay in allowing UN inspectors to the sites was a sign the Syrian government had something to hide.

He said Washington had additional information about the attacks that it would make public in the days ahead.

“What we saw in Syria last week should shock the conscience of the world. It defies any code of morality,” Mr Kerry said at a news conference on Monday. 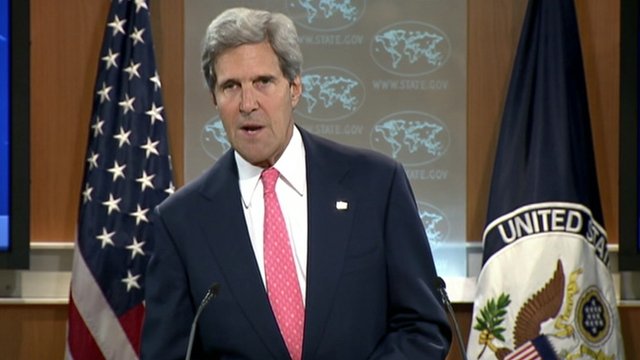 John Kerry: “There is a clear reason that the world has banned entirely the use of chemical weapons”

Washington has recently bolstered its naval presence in the eastern Mediterranean and military leaders from the US, UK and their allies have convened a meeting in Jordan.

Analysts believe the most likely US action would be sea-launched cruise missiles targeting Syrian military installations.

But Russian Foreign Minister Sergei Lavrov told reporters on Monday the West had not produced any proof that President Assad’s forces had used chemical weapons.

He was responding to suggestions from some Western countries that military action against the Syrian government could be taken without a UN mandate.

Mr Lavrov said the use of force without Security Council backing would be “a crude violation of international law”.

Earlier, UK Foreign Secretary William Hague told the BBC an international military response to the suspected use of chemical weapons would be possible without the backing of the UN.

The UN Security Council is divided, with Russia and China opposing military intervention and the UK and France warning that the UN could be bypassed if there was “great humanitarian need”.

In a column in The Times newspaper, former UK PM Tony Blair has written that if the West does not intervene to support freedom and democracy in Egypt and Syria, the Middle East will face catastrophe

The UN says more than 100,000 people have been killed since the uprising against President Assad began more than two years ago. The conflict has produced more than 1.7 million registered refugees.