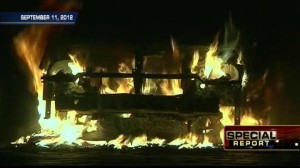 We all know what’s going to happen in Syria. Barack Obama is attempting to do a little dance to talk about “being concerned” and “considering carefully” what to do, but in the end we all know what his decision will be, in spite of the fact that there is no international coalition to strike Syria, nor is their constitutional authority to do so. However, the only people who benefit from a U.S. strike in Syria are the Obama supported Syrian rebels, who are a part of al-Qaeda and directly tied to the very al-Qaeda jihadists (Ansar al-Sharia) that attacked the diplomatic mission and CIA annex in Benghazi, Libya on September 11, 2012, leaving 4 Americans dead and dozens wounded.

Ansar al-Sharia, the al Qaeda-affiliated militia that U.S. officials say orchestrated the Sept. 11 attacks on the U.S. diplomatic compound and a CIA facility in Benghazi, is running several training camps for jihadists in Benghazi and nearby Darnah, another port city further east, said officials who discussed some details of the camps on condition of anonymity.

The officials said the terror training camps have been in operation since at least May and are part of a network that funnels foreign fighters to Syrian rebel groups, including the Al-Nusra Front, the most organized of the Islamist rebel groups fighting the Bashar al-Assad regime in Damascus.

The officials said the jihadist training is a clear indication that Ansar al-Sharia continues to conduct terrorist activities and is linked to jihadists in both Syria and North Africa.

Is this one of those “The enemy of my enemy is my friend” scenarios? Haven’t we learned by now that doesn’t work out well? I guess not.

Though Britain says that a strike on Syria is justified on humanitarian grounds, the British Parliament voted down an endorsement of military action against Syria on Thursday.

Russia and China also pushed away from a United Nations Security Council session which was discussing the draft resolution on Syria proposed by Great Britain.

To top it off, a bi-partisan letter was sent from 116 congressmen to Barack Obama admonishing him to honor the Constitution and get congressional approval in order to strike Syria has gone out.

Is anyone else seeing a problem with this out of control criminal in the White House? It appears that Barack Obama is defying not only the Constitution of the United States, but even the international community. Obama is willing to stand against all opposition except Islamic jihadists.