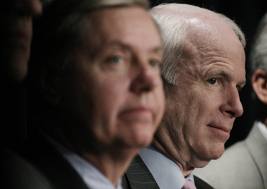 Senators John McCain and Lindsey Graham are insisting that President Obama act now against the Syrian government. In a joint statement they said:

“Using stand-off weapons, without boots on the ground, and at minimal risk to our men and women in uniform, we can significantly degrade Assad’s air power and ballistic missile capabilities and help to establish and defend safe areas on the ground.”

As we reported over the weekend, the U.S. Navy has now moved warships into the Mediterranean and has readied Cruise Missiles for a possible strike against government forces.

Across the internet are dozens of videos showing civilians including men, women and children lying on floors gasping for breath, medics are struggling to save infants and across the internet pictures of rows of bodies of those who reportedly died in the attacks. According to a report from the Local Coordination Committee, a Syrian opposition group, at least 755 people died in the attack. Other reports are claiming much lower numbers citing “dozens” dead. According to the Washington Post, the nonprofit Doctors Without Borders estimates that 355 people were killed and more than 3,600 were injured. If confirmed, it would be the worst chemical weapons attack since Saddam Hussein gassed more than 3,000 people in an Iraqi Kurdish village 25 years ago.

Syrian state television claims the attack came at the hand of al Qaeda backed “rebel” forces. As we reported on Friday, the U.S., Israel and Jordan have been training rebel guerrilla fighters for months just across the border from Syria in Jordan. According to several reports, a wave of 300 or so fighters were sent across the Syrian border on August 17th, and a second wave on August 19th.

Since the reported chemical attack last Wednesday, the Obama administration and members of Congress have been pushing the line that Syria’s President Bashar al-Assad ordered the use of a chemical weapon on the outskirts of Damascus.

According to CNN, one U.S. official claims “There is nothing credible to indicate that the rebels, either the Syrian National Council or even al-Nusra Front, have used chemical weapons. Only the Assad regime is responsible for chemical weapons use.”

But that statement is false. When it comes to this latest incident, at this point we don’t know what kind of chemical might have been used. Nor do we know who used it. Some of the claims early on from “unnamed government sources” were that sarin gas was used in that Damascus suburb. The use of sarin gas would point toward the Assad regime, would it not?

What our national media isn’t telling you is that in May, Turkish security forces found a 2kg cylinder with sarin gas after searching the homes of Syrian militants from the Al-Qaeda linked Al-Nusra Front. Where did the sarin gas come from? We don’t know. But clearly, Al Nusra Front has access to sarin gas and was planning a use for it.

President Obama and his administration keep talking about “the red line” that would have to be crossed in order to bring the United States into this conflict. That “red line” is consistently touted as responding to chemical weapons.

As we’ve reported, the U.S. is already involved: