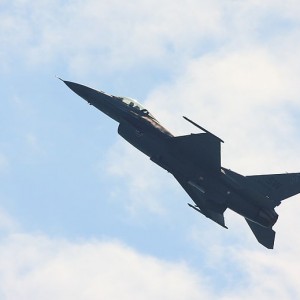 Are you ready to pay four, five or possibly even six dollars for a gallon of gasoline?  War has consequences, and a conflict with Syria has the potential to escalate wildly out of control very rapidly.  The Obama administration is pledging that the upcoming attack on Syria will be “brief and limited” and that the steady flow of oil out of the Middle East will not be interrupted.  But what happens if Syria strikes back?  What happens if Syrian missiles start raining down on Tel Aviv?  What happens if Hezbollah or Iran starts attacking U.S. or Israeli targets?  Unless Syria, Hezbollah and Iran all stand down and refuse to fight back, we could very easily be looking at a major regional war in the Middle East, and that could cause the price of oil to explode higher.  Syria is not a major oil producer, but approximately a third of all of the crude oil in the world is produced in the Middle East.  If the Suez Canal or the Persian Gulf (or both) get shut down for an extended period of time, the consequences would be dramatic.  The price of oil has already risen about 15% so far this summer, and war in the Middle East could potentially send it soaring into record territory.

We can always hope that cooler heads prevail and that a conflict is avoided, but at this point it does not look like that is going to happen.  In fact, according to Richard Engel of NBC News, a senior U.S. official has admitted that “we’re past the point of return” and that a strike on Syria can be expected within days.

Obama is promising that the U.S. will “take limited, tailored approaches”, and that we will not be “getting drawn into a long conflict, not a repetition of, you know, Iraq, which I know a lot of people are worried about”, but how in the world can he guarantee that?

Syria, Iran and Hezbollah have all threatened to attack Israel if the U.S. attacks Syria.

If missiles start raining down on Israeli cities, the Israelis are not just going to sit there and take it like they did during the first Gulf War.  In fact, according to the Los Angeles Times, “Israeli leaders are making it clear that they have no intention of standing down this time if attacked”.

If Israel is attacked, their military response will be absolutely massive.

And then we will have the major regional war in the Middle East that so many people have been warning about for so many years.  Hundreds of thousands of people will die and the global economy will be paralyzed.

So what will Obama do in such a situation?

Will he pack up and go home?

Of course not.  We would be committed to fighting a brutal, horrific war that there was absolutely no reason to start in the first place.

And we are already starting to feel the effect of rising tensions in the Middle East.  This week, the price of oil rose to a 10-month high…

U.S. oil prices soared to an 18-month high as traders worried that a potential military strike against Syria could disrupt the region’s oil supplies.

Posted below is a chart that shows how the price of oil has moved over the past several decades.  Could we soon break the all-time record of $147 a barrel that was set back in 2008?… 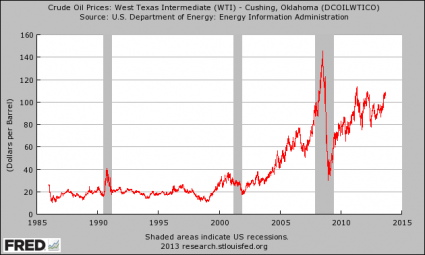 And of course we all remember what happened when the price of oil got that high back in 2008.  The global economy was plunged into the worst downturn since the Great Depression of the 1930s.

A major conflict in the Middle East, especially if it goes on for an extended period of time, could send the price of oil to absolutely ridiculous levels.

Every single day, a massive amount of oil is moved through the Suez Canal.  The following is from a recent Wall Street Journal article…

To the southwest is the Suez Canal, one such chokepoint, which connects the Red Sea and the Gulf of the Suez with the Mediterranean Sea. The canal transports about 800,000 barrels of crude and 1.4 million barrels of petroleum products daily, according to the U.S. Energy Information Administration.

Another regional oil shipping route potentially threatened by the Syria crisis is the Sumed, or Suez-Mediterranean, pipeline, also in Egypt, which moves oil from the Persian Gulf region to the Mediterranean. The Sumed handles 1.7 million barrels of crude oil per day, the EIA said.

And of course an enormous amount of oil moves through the Persian Gulf each day as well.  If the Suez Canal and/or the Persian Gulf were to be shut down, there would almost immediately be global supply problems.

So how high could the price of oil go?

Well, according to CNBC, some analysts believe that $150 a barrel could easily be hit if the U.S. attacks Syria…

Some analysts believe even U.S. crude, West Texas Intermediate (WTI crude) could get close to the $150 zone. “If oil prices spike on the Syria attack, and surge above $120, the next logical upside target is going to be the 2008 high of $147, which could easily be taken out,” said John Kilduff of Again Capital. “It’s the retaliation to the retaliation that we have to be worried about.”

If the price of oil soars up to that level and keeps going, we could see the price of gasoline go up to four, five or maybe even six dollars a gallon in some areas of the country.

You better start saving up lots of gas money.

It looks like you are going to need it.