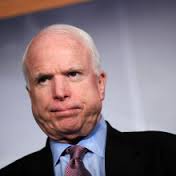 Have you ever wondered why there have been no prolonged attempts at diplomacy in Syria? Why is that? Palestinians and Jews blast each other for decades and all we want to do is try to arrange the peace. We don’t want to get involved militarily. In many conflicts around the world we act as diplomats for peace but in some circumstances we become the aggressors and do so in short order. Keep that in mind. The U.S. wants something from Syria or possibly from Saudi Arabia who is the money behind Al Qaeda there.

At any rate, John McCain is one of the biggest supporters of Syrian Rebels and his beloved Al Qaeda. He took the time to get his picture taken with some real life terrorists a few months ago while on a visit to Syria. I’m sure that meant a lot to him.

I want you to listen to this woman’s plea and tell me that she doesn’t make sense. This war in Syria is nothing more than a sick chess game. Iran sits on one side and Saudi Arabia on the other. The pieces are slaughtered to the frustration of the players but they suffer no casualties themselves. The only real victims are the Syrian people who serve as the pawns. But there is no way to help them by picking sides when both sides are evil.

The woman speaks about this. We can bring peace through shutting down Iran and Saudi Arabia. She is correct. It is possible and we would have allies to help us.

She also talks about how the Rebel forces are largely not even Syrians. These are foreign born members of Al Qaeda who have simply come to Syria as jihadists and these are the people we are supporting.

John McCain makes me puke. He acts as though he knows more about Syria then a woman who was born there and has family there. He is one of many senators who has seemingly lost all touch with reality.

These are the same people who will not even acknowledge our soldiers who are saying that they do not want to fight for Al Qaeda.

Look at everything that is going on and tell me that this has anything to do with humanitarian efforts and I will prove you a fool. We are supporting the enemy and this woman gets it. Enjoy the video as John McCain gets schooled. Please enjoy his body english as you watch him squirm. This is a classic.