Isn’t it a sad commentary on today’s America when an enemy (of sorts) makes way more sense and draws logical conclusions to the serious problem that is Syria when our own president does NOT.

A few days ago, Russian President Vladimir Putin said the US Congress had NO right to unilaterally approve the use of force against Syria without a decision first coming down from the UN Security Council, and that doing so would be what he called an “act of aggression”.

Putin claimed, and rightly so, that Obama doing anything militarily without UN Security Council approval is indeed aggression against a sovereign nation…a nation America is NOT at war with…and that what the US Senate and House is doing is in essence ‘legitimizing that aggression’…and that Putin said is inadmissible in principle to international law.

And how right Putin is for ‘legitimizing aggression’ is Barack HUSSEIN Obama’s way to take his temper tantrum to the next level all because his side…the al-Qaeda and Muslim Brotherhood backed rebels…is losing to al-Assad’s forces.

And with Obama time and again publicly bloviating his support for the rebels, he cannot now renege on that support and still appear as somewhat of a leader, even knowing that the new information and evidence coming to light from reliable Middle Eastern sources casts serious doubts on his oh so wanted ‘truth’ that it was al-Assad who was the one responsible for the sarin gas attacks on civilians, for it now appears (but NOT being reported by the media) that in actually it was his outwardly supported rebel forces launching said gas attacks.

In fact, in a report from the Russian Arabic-language channel RT Arabic, pictures were shown of captured rebel arsenals with what’s believed to be chemical agents and gas masks manufactured in Saudi Arabia that support the Russian claims that the rebels are the ones gassing the people NOT al-Assad. 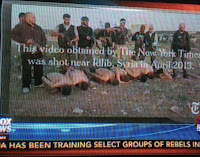 And in a video released yesterday by The New York Times that showed rebel forces shooting execution-style seven Syrian government soldiers, this gives credence to just how bad the rebel forces are, and the Russians have made a very good case for who is really the ‘badder’ of the ‘bad guys’ in Syria.

So if the Russians are proven right…which I believe they will be…in fact I have said it was the rebels doing the gassing and the atrocities since day one…Obama’s ego and narcissism will NEVER allow him to admit he was wrong, for he will NEVER turn on his blood brethren NO matter what they are proven to have done.

And now Obama is on Putin’s home turf with other world leaders who are meeting in St. Petersburg, Russia for the G20 Summit, which while being an economic summit will still at some point have the leaders discussing the situation in Syria.

And with Obama having garnered little international support for military action so far (of the G20 members only France is on board with China and Germany strongly voicing their opposition to any involvement in Syria), you just know Obama will try to feign manliness and face off with Putin…which by the way will be hard to do without his teleprompter…over Putin’s recent remarks doubting the evidence Obama is using to justify his sure to come (with or without Congressional approval) military strike against Syria.

Also, you just know Obama is seething under the collar that Putin has publicly called out his Secretary of State John ‘Swiftboat’ Kerry for what he is…a LIAR of the first degree…a LIAR who deliberately mislead Congress about the role and ties al-Qaeda has to the Syrian rebels…and did so simply to corral support for Obama’s war.

“Al-Qaeda units are the main military echelon, and they (the US) know this…he (Kerry) is lying and knows he is lying. It’s sad,” Putin said. And Putin knows this to be fact for he watched the Congressional debates and heard when a member of Congress asked Kerry: ‘Is al-Qaeda there?’ and Kerry, with a straight face but avoiding eye contact said, “I am telling you responsibly that it is not.

And when pressed further and asked whether it was “basically true” that the Syrian opposition had “become more infiltrated by al Qaeda over time, Kerry LIED and said: “No, that is actually basically not true. It’s basically incorrect”.

The very man who LIED about the extent of his military service in Viet Nam is now LYING to Congress so that Obama can take America to war…and shooting even one Tomahawk missile into Syria is indeed an act of war in case Kerry did NOT know it..

And as a counter to Kerry’s LIES and Obama’s bloviations, Putin pledged to give al-Assad a ‘missile shield’ if Obama attacks them…a missile shield Russia cancelled a few years ago under strong US and Israeli pressure. In fact, Putin has already given some components of the S-300 air defense missile system to al-Assad, but with a warning that, “If we see that steps are taken that violate the existing international norms, we shall think how we should act in the future, in particular regarding supplies of such sensitive weapons to certain regions of the world.”

Smart man saying all the right things at the right time, but I’m smart enough to know that we cannot trust Putin completely, but even trusting him half way is better than trusting Barack HUSSEIN Obama at all.