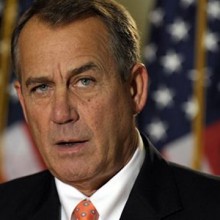 In a passionate letter, dated September 4, 2013, the Speaker of the People’s Assembly of the Syrian Arab Republic Mohammad Jihad al-Lahham wrote to Speaker of the House John Boehner and asked that he read it before the Congress. In the letter, al-Lahham pleaded with the United States Congress to listen not only as “fellow Parliamentarians,” but also as “fathers and mothers….human beings” asking, “if you bomb us, shall we not bleed?” The Speaker also pointed out that many innocent people would be harmed in such an attack.

“Local tragedies become regional wars that led to global conflict because of the lack of communication among nations,” al-Lahham writes. “We urge you to communicate with us through civilized dialogue rather than the language of fire and blood.”

Al-Lahham pointed out that Syria is the “last living genuine secular state in the Middle East” and that it was the “first country that faced fundamentalist fanatic terrorism in the late seventies.” His country is now facing “tens of thousands of none (sic) Syrian jihadists.”

He then quotes President Franklin D. Roosevelt, “I ask you to judge me by the enemies I have made.”

The groups holding the Wahhabi jihadi ideology, according to al-Lahham are al-Qaeda, al-Nusra and its affiliates.

Al-Lahham also noted that the March 2013 chemical attacks investigation team was delayed by more than five months by the US. France and the United Kingdom’s intervention.

He also listed the following events:

According to al-Lahham, and I agree with him, doesn’t this demonstrate that it is the Obama backed jihadists that possessed and used chemical weapons? However, al-Lahham goes on to ask, “Logically, what is the benefit of the Syrian Government to commit a chemical attack crime during the visit of the U.N. Independent International Commission of Inquiry on Syria within less than 4 miles from the Commission resident at Four Seasons Hotel?!”

He then invites members of congress to come to Syria or to send a delegation so that they might ascertain for themselves what is going on.

He then forcefully states that he believes that an “aggressive and unjustified act of war” on Syria would be unfair and illegal due to the following reasons:

He then called on the US not to “rush into any irresponsible reckless action” and to work alongside Syria to fight a common enemy.

I believe that Mr. al-Lahham’s letter is spot on, and that what is taking place in our government is most definitely paving the road to war crimes. I’m just hoping that some of our elected officials with take this matter serious and stop posturing themselves politically and with the Saudi government and do the right thing. Let’s keep our nose out of Syria.