He’s escalating the war, and we aren’t even in it yet. This self-important fool could get us mired in Syria for years, and provoke a much larger conflict.

Pentagon Is Ordered to Expand Potential Targets in Syria With a Focus on Forces New York Times, September 5, 2013 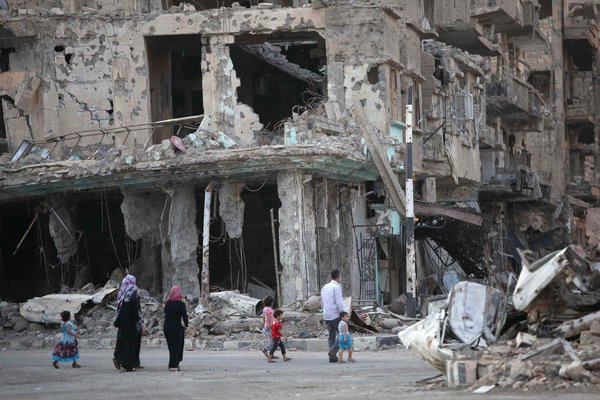 People on Wednesday walked along a damaged street in Deir al-Zour, an eastern city in Syria that has been a recurrent battleground in the conflict.

WASHINGTON — President Obama has directed the Pentagon to develop an expanded list of potential targets in Syria in response to intelligence suggesting that the government of President Bashar al-Assad has been moving troops and equipment used to employ chemical weapons while Congress debates whether to authorize military action.

Mr. Obama, officials said, is now determined to put more emphasis on the “degrade” part of what the administration has said is the goal of a military strike against Syria — to “deter and degrade” Mr. Assad’s ability to use chemical weapons. That means expanding beyond the 50 or so major sites that were part of the original target list developed with French forces before Mr. Obama delayed action on Saturday to seek Congressional approval of his plan.For the first time, the administration is talking about using American and French aircraft to conduct strikes on specific targets, in addition to ship-launched Tomahawk cruise missiles. There is a renewed push to get other NATO forces involved.

The strikes would be aimed not at the chemical stockpiles themselves — risking a potential catastrophe — but rather the military units that have stored and prepared the chemical weapons and carried the attacks against Syrian rebels, as well as the headquarters overseeing the effort, and the rockets and artillery that have launched the attacks, military officials said Thursday.

Gen. Martin E. Dempsey, the chairman of the Joint Chiefs of Staff, has said that other targets would include equipment that Syria uses to protect the chemicals — air defenses, long-range missiles and rockets, which can also deliver the weapons.

Mr. Obama’s instructions come as most members of Congress who are even willing to consider voting in favor of a military response to a chemical attack are insisting on strict limits on the duration and type of the strikes carried out by the United States, while a small number of Republicans are telling the White House that the current plans are not muscular enough to destabilize the Assad government….

For now, White House officials insist that they are slowly gaining ground in lining up support, though the evidence is slim. “We’re very pleased with the trend lines,” said Benjamin J. Rhodes, the president’s deputy national security adviser. “I think each day what you’ve seen is different members coming out on a bipartisan basis to support an authorization to use military force.”