Having almost NO international support except for France and Turkey, on Tuesday Barack HUSSEIN Obama will go on national television to grovel and beg the American people to support his having us go to war against a country we’re NOT at war with and who is NOT at war with us.

Obama’s been saber-rattling over the past few weeks NOT because he has the guts to follow through with his ‘targeted strikes’ bloviations, but because he had to stand strong against Vladimir Putin..or should I say he tried to stand strong because Putin has NOT only rendered Obama politically impotent in regards to Syria, but has also made him the laughing stock of the world. Making Obama a laughing stock so much so that he’s now sending out hints that he may abandon his oh so wanted Syrian strike completely if he can find other avenues to explore…to explore to take the heat of him as the game Putin is playing of ‘put up or shut-up’ will have Obama scurrying away like a rat deserting a sinking ship.

To take the heat off him and to try and take ‘We the People’s’ eyes off Benghazi.

‘Other avenues to explore’…Obama’s saying that because it seems Congress will call his bluff…as in he asked for authorization to go to war but Congress appears NOT to be giving it to him. And while the Democratic controlled Senate might approve authorization in its usual strictly partisan vote, authorization will most assuredly die in House as few Democratic or Republican representatives have voiced support for getting involved in Syria even with what Obama claims will be a ‘limited strike’.

So now Obama either has to honor the final decision of Congress as he should, and stop his saber-rattling or he has to use his power as president and send us to war unilaterally with NO support either at home or from most of our allies.

And we all know he is narcissistic enough to do just that.

“I’m not itching for military action…and if there are good ideas that are worth pursuing, then I’m going to be open to them,” Obama said at a hastily arranged press conference while at the G20 Summit. 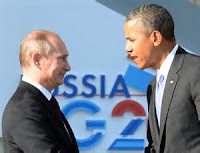 And isn’t it odd that suddenly now when Putin pushes him into a corner…publicly chastises him for wanting to start World War III…actually making him appear as a buffoon…does Obama claim there are other options.

Now saying, “My goal is to maintain the international norm on banning chemical weapons. I want that enforcement to be real…I want people to understand that gassing innocent people, you know, delivering chemical weapons against children, is not something we do,” Obama’s words are NOT quite what they appear to be at first glance.

Notice the words…”it’s NOT something we do”…NO…we the United States of America do NOT gas innocent people, but brutal and barbaric muslim rebels…rebels supported and backed by al-Qaeda…do…and this is the side Barack HUSSEIN Obama has brought our country to.

So all Obama’s talk of military action…talk of a ‘supposed’ moral responsibility to call to task al-Assad for the atrocities he’s ‘supposedly’ committed has been diluted talk of how America’s reputation would suffer if Obama did NOT act. And as it stands right now most world leaders just roll their eyes when Obama talks of ‘moral responsibility’ for Obama has been bloviating about gas attacks for months and has done NOTHING of any substance to corral in either side in order to help diffuse the death toll Syria’s civil war is racking up….a death toll the vast majority of which is NOT from gas attacks but from rebel initiated attacks against al-Assad’s government forces.

And with 70% of the Syrian people supporting the secular government of al-Assad (according to a NATO study)…more than who support Obama here at home…one can clearly see who the ‘badder’ of the ‘bad’ guys is. The Syrian people are tired of the lingering war against the foreign backed opposition …opposition whose loyalty is to al-Qaeda and the Muslim Brotherhood, with their de-facto ties to Obama. The Syrian people know Barack HUSSEIN Obama is NOT on their side as his support of the rebels…the ‘terrorists’ as al-Assad calls them…is support for an islamic state where civil liberties and individual rights…as minimal as they are…will be replaced by the repressive subjugating rule of sharia law.

And if Obama had NOT drawn the ‘red line’ that he now claims he did NOT draw (which he indeed did)…if he did NOT throw the gauntlet down so to speak…the question would still remain as to why does he really want to go into Syria for he knows damn well that if and when he gives the ‘go order’ to start the bombing then so starts a face off with Russia and Iran…a face off that would lay the groundwork for World War III…with the effect on Israel being NOTHING short of catastrophic.

So Tuesday will tell if Obama is truly the ultimate salesman those who orbit around him believe him to be…or Tuesday will show him to be the most inept, unqualified, miserable excuse of a president we patriots know him to be…and Russia and Iran will be watching to see if America is going to war on the side of those out to kill us all.