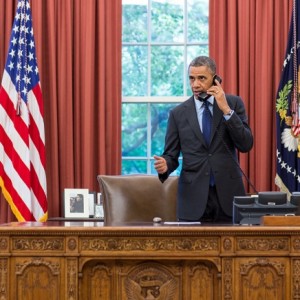 Have you heard about the “wonderful” employment numbers that were just released?  Last month, the unemployment rate declined to 7.3 percent.  Somehow this happened even though the percentage of working age Americans with a job actually declined and the number of private sector workers fell by 278,000.  So how did the federal government magically produce a drop in the unemployment rate even though less people have jobs?  Well, they did it by pretending that more than half a million Americans “dropped out of the labor force” last month.  If the government is to be believed, the number of Americans that want to work dropped by an astounding 516,000 in a single month even though the population of our country is constantly increasing.  The federal government continues to feed us absolutely absurd numbers month after month, and at this point “the official unemployment rate” is essentially meaningless.

But that doesn’t mean that Barack Obama is about to drop the charade.  In fact, he continues to insist that the economy is getting better.  The following is an excerpt from one of Obama’s recent weekly radio addresses…

Over the past four and a half years, we’ve fought our way back from the worst recession of our lifetimes. And thanks to the grit and resilience of the American people, we’ve begun to lay a foundation for stronger, more durable economic growth.

Does he actually believe that anyone is still buying what he is saying?

The cold, hard truth is that the U.S. economy has not recovered while Obama has been in the White House.  If you doubt this, please see my previous article entitled “33 Shocking Facts Which Show How Badly The Economy Has Tanked Since Obama Became President“.

Since World War II, the percentage of working age Americans that is employed had always bounced back dramatically after a recession ended.

Unfortunately, that has not happened this time.

As you can see from the chart posted below, the percentage of working age Americans with a job has stayed below 59 percent since late 2009.  This chart reflects the most recent employment numbers… 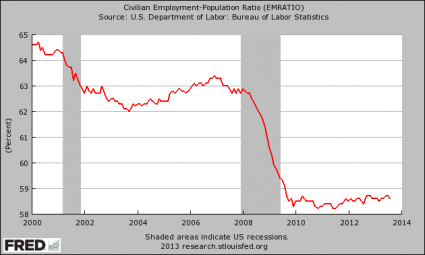 So where is the recovery Obama?

Can he possibly put a positive spin on the chart above?

The truth is that the official unemployment rate should still be up around 10 percent like it was a few years ago.

But that wouldn’t make Obama look very good, would it?  So the U.S. government has been pretending that millions upon millions of Americans have been “leaving the labor force”.  This has pushed the labor force participation rate to a 35-year-low… 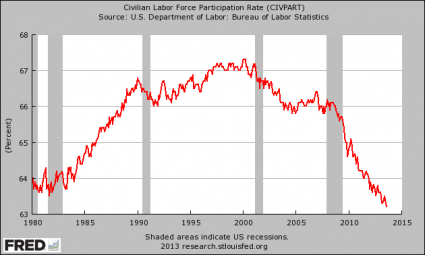 At this point, we have more than 90 million Americans that are considered to be “not in the labor force”…

On Friday, the BLS reported that the 90,473,000 Americans not currently in the labor force marked the first time the figure exceeded the 90 million threshold.

For men, the BLS reported the labor force participation rate, the percentage of the population working or considered looking for work, was 63.2 percent in August, basically unchanged from 63.5 percent in July. It’s also a record low.

How low can that number possibly go?

Meanwhile, the quality of our jobs continues to decline rapidly as well.  If you can believe it, at this point more than 40 percent of all U.S. workers actually make less than what a full-time minimum wage worker made back in 1968.

As a result, the U.S. middle class is steadily dying.  The following is from a recent Yahoo article…

For much more on this, please see my previous article entitled “44 Facts About The Death Of The Middle Class That Every American Should Know“.

And unfortunately, things look like they may start getting a lot worse for ordinary Americans.

Right now, there is not much demand for U.S. Treasury bonds.  Foreigners have become net sellers of U.S. Treasuries and domestic demand has become quite weak.  Without the Federal Reserve buying up tens of billions of dollars worth of U.S. Treasuries each month, where will the demand come from?

That is a very good question.  If the Fed starts to taper quantitative easing in September, that is almost certainly going to send bond yields soaring.  Already, bond yields have been rising steadily, and if they get too high it is going to be absolutely disastrous for the U.S. economy.

If the U.S. attacks Syria, it will likely cause financial markets all over the planet to descend into chaos and send the price of oil skyrocketing.

And that assumes that the conflict is limited to only the United States and Syria.  If Syria decides to retaliate by launching missiles at Israeli cities, that will set off a major regional war in the Middle East and the consequences for the global economy will be off the charts.

So as bad as the U.S. economy is right now, the truth is that things could easily get much, much worse.

Let us hope for the best, but let us also prepare for the worst.