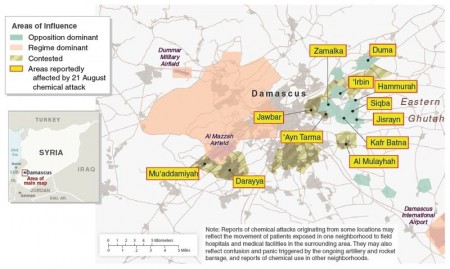 Did you know that the United Nations has had evidence that the Syrian rebels have been using sarin gas against Syrian government forces since May?  This was reported by Reuters and other major news organizations around the world, but there has been an almost total blackout of this information by the big corporate news outlets in the United States.  So why are they keeping the truth from us?  What you are about to read might really surprise you.  The Syrian rebels have been caught red-handed with sarin gas in their possession, the UN has had evidence that the rebels have been using sarin gas for several months, and the Syrian rebels have even admitted that they were the ones that caused the deadly gas attack that the U.S. government is using as justification to attack Syria.  Please share this article with as many people as you can, because it is absolutely imperative that we get the truth in front of the American people.

All the way back before the beginning of the summer, the UN has known that the rebels have been using sarin gas against forces loyal to Assad.  The following is from a Reuters report that was published back in May…

U.N. human rights investigators have gathered testimony from casualties of Syria’s civil war and medical staff indicating that rebel forces have used the nerve agent sarin, one of the lead investigators said on Sunday.

The United Nations independent commission of inquiry on Syria has not yet seen evidence of government forces having used chemical weapons, which are banned under international law, said commission member Carla Del Ponte.

“Our investigators have been in neighboring countries interviewing victims, doctors and field hospitals and, according to their report of last week which I have seen, there are strong, concrete suspicions but not yet incontrovertible proof of the use of sarin gas, from the way the victims were treated,” Del Ponte said in an interview with Swiss-Italian television.

“This was use on the part of the opposition, the rebels, not by the government authorities,” she added, speaking in Italian.

The explosion claimed the lives of Syrian Armed Forces soldiers who are apparently loyal to Assad, and the Syrian government was quick to demand an international investigation of the incident. These two facts would indicate that Assad’s forces were not behind the attack.

In addition, from what has been released of the physical and medical evidence, it seems that some of the injuries were caused by chlorine. While chlorine gas has been used in the past as a weapon, mainly in the First World War, the chemical arsenals of nations developing these weapons have for decades focused mainly on mustard gas and various types of nerve agents, which, had they been used last week, would have caused different symptoms that were not observed.

It appears that the target of the attack was a checkpoint manned by Syrian Armed Forces, which reinforces the theory that rebel forces, probably jihadists known to be operating around Aleppo, were behind it. A report by Britain’s Channel Four, based on Syrian military sources, claims that the weapon used in the attack may have been a missile carrying a warhead filled with chlorine mixed into a saline solution. The Syrian source also said that a factory that manufactures chlorine is located nearby.

In June, Turkish forces actually seized a large cylinder of sarin gas from Syrian rebels along the border between Turkey and Syria…

Russia has called on Turkey to share its findings in the case of Syrian rebels who were seized on the Turkish-Syrian border with a 2kg cylinder full of nerve gas sarin.

And there is lots of video evidence that rebels have been repeatedly using chemical weapons that were manufactured in Saudi Arabia during the Syrian civil war.  If you doubt this, just check out this article.

That brings us to the horrible chemical weapon attack which resulted in so many deaths that the United States is apparently so concerned about.

The U.S. claims that the Syrian rebels do not have the capacity for such at attack and that therefore it must have been the work of Syrian government forces, but those on the ground have discovered a whole host of evidence to the contrary.

For example, Dale Gavlak, a reporter that has worked for the AP, NPR and the BBC, has conducted numerous interviews with rebel fighters that openly admit that the chemical attack was carried out by rebel forces…

However, from numerous interviews with doctors, Ghouta residents, rebel fighters and their families, a different picture emerges. Many believe that certain rebels received chemical weapons via the Saudi intelligence chief, Prince Bandar bin Sultan, and were responsible for carrying out the dealing gas attack.

“My son came to me two weeks ago asking what I thought the weapons were that he had been asked to carry,” said Abu Abdel-Moneim, the father of a rebel fighting to unseat Assad, who lives in Ghouta.

Abdel-Moneim said his son and 12 other rebels were killed inside of a tunnel used to store weapons provided by a Saudi militant, known as Abu Ayesha, who was leading a fighting battalion. The father described the weapons as having a “tube-like structure” while others were like a “huge gas bottle.”

And according to Gavlak, the chemical weapons had been supplied to Jabhat al-Nusra by Saudi Arabia…

“When Saudi Prince Bandar gives such weapons to people, he must give them to those who know how to handle and use them,” she warned. She, like other Syrians, do not want to use their full names for fear of retribution.

A well-known rebel leader in Ghouta named ‘J’ agreed. “Jabhat al-Nusra militants do not cooperate with other rebels, except with fighting on the ground. They do not share secret information. They merely used some ordinary rebels to carry and operate this material,” he said.

So if the U.S. truly wants to bomb the ones that are responsible for the chemical weapon attacks, should they actually be bombing Saudi Arabia instead of Syria?

But of course the U.S. would never do such a thing.  The Saudis are our “friends”.

Sadly, there is a growing body of evidence that the Saudis actually helped set this whole thing up to draw the U.S. military into the conflict.  At least that is the conclusion that one group of former U.S. intelligence analysts has come to…

They claim the “growing body of evidence” reveals the incident was a pre-planned provocation by the Syrian opposition and its Saudi and Turkish supporters.

“The aim is reported to have been to create the kind of incident that would bring the United States into the war,” one former U.S. intelligence analysts said.

The analysts referred to a meeting a week before the Aug. 21 incident in which opposition military commanders ordered preparations for an “imminent escalation” due to a “war-changing development” that would be followed by the “U.S.-led bombing of Syria.”

And there is a lot of other evidence that the Syrian rebels were behind the attack as well.  The following is from a recent article by Paul Joseph Watson…

In addition, leaked phone conversations that emerged earlier this year between two members of the Free Syrian Army contain details of a plan to carry out a chemical weapons attack capable of impacting an area the size of one kilometer.Footage was also leaked showing opposition militants testing what appeared to be nerve agents on laboratory rabbits.

On Thursday we featured a video of an FSA militant apparently confessing to using chemical weapons in order to follow Osama Bin Laden’s mantra of killing women and children.

Unfortunately, even though a small minority of Americans are very passionate about these things, most Americans don’t really seem to care.  In fact, most Americans seem to be far more interested in Miley Cyrus than what is going on in Syria…

Outbrain supplies “related links” modules to a network of 100,000 publishers, including major news sources like CNN, Fox News, and ESPN. On any given day, 87 percent of Americans who browse the web will view a page with an Outbrain module, explains the company’s vice-president of global marketing. They collect traffic data from every site in their network, which they use in a variety of algorithms to generate recommendations.

Interest in the starlet significantly outpaced Syria in England, Australia, France, Germany, and every other nation in Outbrain’s analysis — except Israel and Russia. Globally, Miley Cyrus stories generated eight times as many page views as Syria did in the days surrounding the VMAs.

Hopefully Congress will vote not to authorize a military strike on Syria.

On Monday, the White House once again made it abundantly clear that Obama believes that he has the authority to strike Syria even without the approval of Congress…

The White House insisted Monday that it was legally able to launch a strike on Syria without congressional approval even as it intensified its courting of lawmakers to support military action.

White House counsel Kathryn Ruemmler told the New York Times that a strike would be lawful under both domestic and international law. She told the paper that the president could strike because of the “important national interests” surrounding the use of chemical weapons, even without Congress or United Nations approval.

Ruemmler contended that while the Syria situation “may not fit under a traditionally recognized legal basis under international law,” it would nevertheless be “justified and legitimate.”

Please share this with as many people as you can.

We are about to start a major war in the Middle East based on a lie.

We need to try to stop this while we still can.