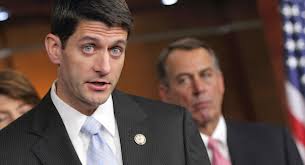 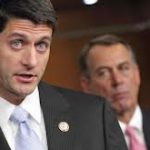 There is no Republican leadership in the House of Representatives. John Boehner, Eric Cantor and Paul Ryan have all demonstrated they don’t have any idea of what they are supposed to be doing in representing their people. News broke yesterday that the House GOP “leadership” is planning to cave on their stand to defund Obamacare for the rest of 2013. Boehner gave indication that this was the direction he was moving in.

Text of the Continuing Resolution (CR) that will fund the government for 60-75 days will be released on Tuesday, the conservative source said, before a House vote on Thursday. The move comes abruptly as conservatives are ramping up their final push on House leadership with a big Tea Party rally outside the Capitol on Tuesday calling for Obamacare’s defunding.

House Speaker John Boehner’s spokesman Michael Steel told Breitbart News the “CR will include defunding ObamaCare,” but would not specify whether or not a certain procedural “trick” the GOP leadership used in a similar situation in 2011 will be employed yet again.

Breitbart News’ source, a high-ranking conservative movement figure close to House conservatives, said that this CR from House leadership will continue to pay for Obamacare’s implementation without cutting from current levels of taxpayer funding for the healthcare law’s rollout, despite claims from Boehner’s office it will “include defunding ObamaCare.” The source said the budget riders that will be attached to the CR can be removed easily by Senate Majority Leader Harry Reid, allowing him to pass a CR through the Senate funding Obamacare–a procedural move that does not require the House to revisit its CR and makes the Senate version final.

The source added that House Majority Leader Eric Cantor is “shopping an idea of passing defund through the House with the CR, but with a mechanism that would allow it to be decoupled in the Senate, defeated, and then the base CR be passed without coming back to the House.”

The source said the conservative movement should “reject and pan” this “trick” from Cantor, which allows House GOP members to claim they voted to defund Obamacare but allows Reid to strip out budget riders defunding Obamacare and pass a Senate CR without them.

In rushing the CR to the floor for a vote, Breitbart News’ source said that House GOP leadership will put votes on whether the U.S. should authorize use of military force in Syria off until next week.

House Republicans are dusting off an old legislative gambit from April 2011 as one way to move ahead this week with a stopgap spending bill for the first months of the new fiscal year beginning Oct. 1.

The goal is to give conservatives a vote on defunding health care reform without resulting in a government shutdown. It has worked before, but “before” is the operative word. And until Tuesday’s Republican Conference, Speaker John Boehner (R-Ohio) and Majority Leader Eric Cantor (R-Va.) won’t really know whether this flash from the past can flash again.

Most simply, the procedure calls for sending the Senate a stopgap spending bill with a resolution that would alter the text of the bill once it’s enrolled for presentation to President Barack Obama.

Rick Manning, the vice president for public policy and communications at Americans for Limited Government, said “If Congress ends up funding Obamacare in the Continuing Resolution, House Republicans will own it every bit as much as if they had voted for it in the beginning. Parliamentary tricks will not save them from this reality.”

Club for Growth president Chris Chocola denounced the reported plan in a statement Monday afternoon: “Are these news reports from The Onion? Or are they real?” Chocola said. “When members were at home over recess, did they hear their constituents ask for legislative tricks or principled leadership?

“Trying to fool Republicans into voting to fund Obamacare is even worse than offering a bill that deliberately funds it,” Chocola declared. “I hope this proposal is nothing more than a bad joke and is quickly discarded. Republicans should simply do what they say they are for by passing a Continuing Resolution that doesn’t fund Obamacare.”

I have news for Chocola, this isn’t a joke. It is real and it should come as absolutely no surprise to anyone who has been paying attention. Once again, Boehner is demonstrating that he cannot take a stand on a monumental issue, and that he continues his track record of selling out to Barack Obama. In the end, it’s the American people who are harmed by these men. Isn’t it time to send them packing along with the usurper in the Oval Office and install new leadership? I’ll would recommend looking to men with principles and backbone, like Justin Amash and Steve Stockman, to lead in the House of Representatives.