Over a year now after the jihad against our consulate in Benghazi that led to the suspected rape and murder of our Ambassador and the murder of the US attaches, and no one has been apprehended.

“U.S. intelligence officials, and our war fighters in the Defense Department, are hamstrung by a law enforcement model,” said Thomas Joscelyn of the Center for Defense of Democracies.

Now FOX News is reporting that the Obama administration’s intention is to try the enemy combatants in US courts. This is not a law enforcement issue, this is war; but Obama would rather see Americans dead than admit jihad exists and means to destroy the West. So this is …..street crime? And what would Obama try them with, anyway? “By the time the FBI reached the consulate where four Americans died on Sep. 11, 2012, the crime scene was contaminated.” It took them a month to get there, and the AP reported that the FBI came and left after about 12 hours on the ground. “Agents arrived in Benghazi before dawn on Thursday and departed after sunset, after weeks of waiting for access to the crime scene to investigate the Sept. 11 attack.”

And these keystone kops are going to prosecute this case?

Lawmaker: If CNN can interview Benghazi suspect, why can’t FBI.

“Islamic extremism appears to be on the rise in eastern Libya,” the ambassador wrote, adding that “the Al-Qaeda flag has been spotted several times flying over government buildings and training facilities…” 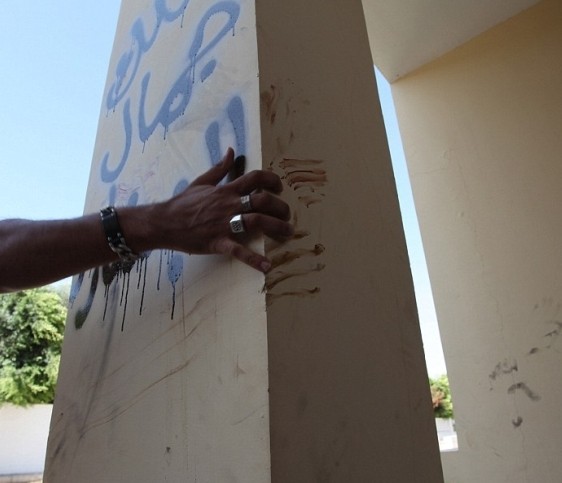 CBS Report: U.S. Had Predator Drone Over Benghazi As Attack Happened, “They Stood, And They Watched, And Our People Died”…  […] (thanks to Conservative Treehouse)

CBS News has been told that, hours after the attack began, an unmanned Predator drone was sent over the U.S. mission in Benghazi, and that the drone and other reconnaissance aircraft apparently observed the final hours of the protracted battle.

WASHINGTON DC – slain U.S. Ambassador to Libya Chris Stevens and the security officers assigned to protect him repeatedly sounded alarms to their superiors in Washington about the intensifying lawlessness and violence in Eastern Libya, where Stevens ultimately died.

On September 11 – the day Stevens and three other Americans were killed – the ambassador signed a three-page cable, labeled “sensitive,” in which he noted “growing problems with security” in Benghazi and “growing frustration” on the part of local residents with Libyan police and security forces. These forces the ambassador characterized as “too weak to keep the country secure.”

In the document, Stevens also cited a meeting he had held two days earlier with local militia commanders. These men boasted to Stevens of exercising “control” over the Libyan Armed Forces, and threatened that if the U.S.-backed candidate for prime minister were to prevail in Libya’s internal political jockeying, “they would not continue to guarantee security in Benghazi.”

Now this. We should be killing these savages on the battlefield, but Obama wants to give them three squares a day, a prayer mat, a Quran and the opportunity to radicalize the prison population.  Mind blowing.

Plans to try Benghazi attackers in US courts blocks case, congressman says By Catherine Herridge:September 14, 2013  (thanks to Counter Jihad)

Plans by the administration to use U.S. criminal courts to prosecute those responsible for last year’s terror attack in Benghazi have thrown up yet another roadblock to investigating the case, the Republican chairman of the House Intelligence Committee told Fox News Friday.

“This whole plan has been, all along, to bring them to a criminal court in the United States. I’m not sure that’s in our national security best interest,” Congressman Mike Rogers of Michigan said in an exclusive interview. “I don’t know how anyone could come to the conclusion that it hasn’t slowed it down.”

Based on intelligence reporting, the delay has allowed the Benghazi suspects to remain free and engaged within their terrorist organizations.

As for possibly targeting them with drone strikes, counter terrorism analysts say the administration’s prosecution strategy has effectively pushed that option aside.

“U.S. intelligence officials, and our war fighters in the Defense Department, are hamstrung by a law enforcement model,” said Thomas Joscelyn of the Center for Defense of Demcracies.

“There are a lot of guys who are known terrorists, who are known suspects in the Benghazi attack, who could be taken off the battlefield today.”

“Our position on GTMO is certainly clear, that we are not sending anyone to GTMO, that in fact, we are working to reduce the population at GTMO, ultimately with the goal of closing it.” Marie Harf. State Department spokeswoman, said Friday.

Another problem is that while a criminal case requires physical evidence, by the time the FBI reached the consulate where four Americans died on Sep. 11, 2012, the crime scene was contaminated.