Recently, you wrote an editorial that ran in The New York Times…basically a letter addressed to ‘We the People’ explaining your stance in regards to Syria, and why you did what you did in brokering the deal requiring Syria to turn over their chemical weapons to international control…which we all know means U(seless) N(ations) control.

And so far it seems your deal is holding as your Foreign Minister Sergey Lavrov and our Secretary of State John ‘Swiftboat’ Kerry worked out the fine points, and Bashar al-Assad has agreed in turn to follow through on his pledge to surrender his weapons…yet he gets to keep his bio-weapons…and that in and of itself shows just how calculating you, Mr. Putin, and al-Assad both are. Calculating and clever like foxes for you both have made Barack HUSSEIN Obama appear even more impotent and incompetent as a leader than ‘We the People’ already knew he was for he missed the obvious while keeping his eyes focused on exactly where you wanted his focus to be…on chemical weapons alone.

And after rereading your editorial a few times, I found it really quite well-written with its facts for the most part true and concise in its allegations, however, where I diverge from your words is where you talk about ‘American exceptionalism’…where you speak of your distaste for the very idea that there is ‘American exceptionalism’ yet NEVER speaking a word of how you promote ‘Russian nationalism’ every chance you get. Yet even with this Mr. Putin, you rightfully see that a strong stand against the use of chemical weapons is part of what makes any country ‘exceptional’, while at the same time seeing that Barack HUSSEIN Obama is NOT the one to implement that ‘exceptional’ stand in regards to ‘red lines’ drawn in the sand over a year ago.

And no one can blame you for then acted accordingly.

“My working and personal relationship with President Obama is marked by growing trust. I appreciate this. I carefully studied his address to the nation on Tuesday. And I would rather disagree with a case he made on American exceptionalism, stating that the United States’ policy is “what makes America different. It’s what makes us exceptional.” It is extremely dangerous to encourage people to see themselves as exceptional, whatever the motivation.”

And so Obama addressed our nation and as usual he read from a teleprompted script written by speechwriters. And while he mouthed words in regards to ‘American exceptionalism’…he was correct when he stated that US policy is “what makes America different. It’s what makes us exceptional”…he was wrong in how he implied those words.

Mr. Putin, to ‘We the People’ liberty means freedom from the control of an arbitrary or despotic government…it means freedom from external or foreign rule. Liberty to us means independence from control, interference, obligation, and restrictions along with the right to do, think, and speak according to our own choice.

So Mr. Putin, Obama bloviates for himself while NOT reflecting the wishes of the American people. 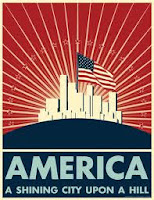 But right now my bone to pick is with you Mr. Putin for you do NOT understand what ‘American exceptionalism’ truly means. The words ‘American exceptonalism’ are NOT meant to imply simple superiority per se, but you must realize…you must know in your heart…that America is indeed superior…superior because of our founding…born of revolution…growing through trial and error…and arriving at the point in time where we are indeed ‘the shining beckon on the hill’ carved out and sustained by the greatest document of freedom ever written…the United States Constitution…the law of our land that sets us apart from other nations. Our Constitution makes America the greatest nation the world has ever known…the country to which many risk their lives to come to for they know America is the land were dreams become hopes and hopes turn into reality with NOTHING needed except hard work and determination.

YES, Mr. Putin, America is exceptional for this country is a melting pot…maybe NOT a pot that is always stirred smooth but a melting pot nevertheless, where different nationalities can meld their own uniqueness into the whole…into the whole that is America…and that is the very definition of ‘exceptionalism’.

Can you say that about Russia…I think NOT.

And isn’t it odd that the very words…the very ideal…that so irked you were actually spoken back in 1929 by your hero Joseph Stalin, who used the words in response to a group of American communists who claimed that US style capitalism might constitute an exception to Marxist thought.

On hearing this Stalin decreeing an end to the “heresy of American Exceptionalism”…Stalin’s own words while condemning ‘America exceptionalism’ still fearing it.

And so Mr. Putin, while I admire your tenacity and fortitude in standing strong against our miserable excuse of a president…a president who leads from behind if he leads at all…checkmating him in the dangerous game of disarmament diplomacy…I will continue to take umbrage with your belief that America is NOT ‘exceptional’ for NO other country in the world today values liberty, equality, and justice above all else. What makes us ‘exceptional’ is that America gives hope to people encompassed within a world overrun with oppression, destitution, and fear…gives hope to people longing for freedom that only the United States of America can offer them.

And that Mr. Putin, is what constitutes ‘American exceptionalism’…and that is something ‘We the People’ will NOT allow your words to take away from us for America is ‘One nation under God with liberty and justice for all’…and we intend for her to stay that way.