As predicted days before the UN’s Syrian chemical weapons report was made public, the West has begun spinning the findings to bolster their faltering narrative regarding alleged chemical weapon attacks on August 21, 2013 in eastern Damascus, Syria. The goal of course, is to continue demonizing the Syrian government while simultaneously sabotaging a recent Syrian-Russian deal to have Syria’s chemical weapon stockpiles verified and disarmed by independent observers. 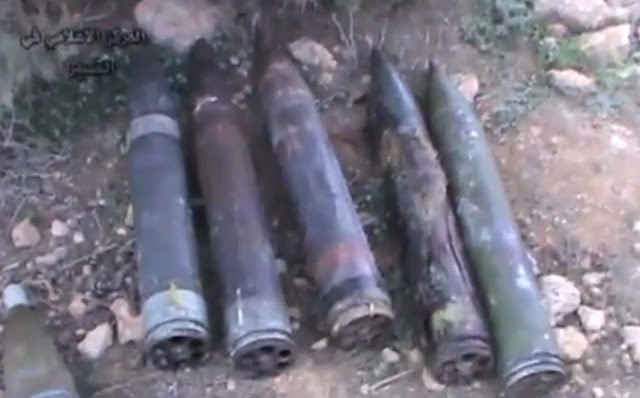 Image: 107mm rocket shells frequently used by terrorists operating within and along Syria’s borders. They are similar in configuration and function to those identified by the UN at sites investigated after the alleged August 21, 2013 Damascus, Syria chemical weapons attack, only smaller.

A barrage of suspiciously worded headlines attempt to link in the mind of unobservant readers the UN’s “confirmation” of chemical weapons use in Syria and Western claims that it was the Syrian government who used them. Additionally, the US, British, and French governments have quickly assembled a list of fabrications designed to spin the UN report to bolster their still-unsubstantiated accusations against the Syrian government.

The UN report did not attribute blame for the attack, as that was not part of its remit.

However, that did not stop UK Foreign Secretary William Hague who claimed:

From the wealth of technical detail in the report – including on the scale of the attack, the consistency of sample test results from separate laboratories, witness statements, and information on the munitions used and their trajectories – it is abundantly clear that the Syrian regime is the only party that could have been responsible.

And US ambassador to the UN Samantha Power who stated:

The technical details of the UN report make clear that only the regime could have carried out this large-scale chemical weapons attack.

When you look at the findings carefully, the quantities of toxic gas used, the complexity of the mixes, the nature, and the trajectory of the carriers, it leaves absolutely no doubt as to the origin of the attack.

The Washington Post went one step further, and perhaps foolishly, laid out a detailed explanation of each fabrication the West is using to spin the latest UN report. In an article titled, “The U.N. chemical weapons report is pretty damning for Assad,” 5 points are made and explained as to why the UN report “points” to the Syrian government.

1. Chemical weapons were delivered with munitions not used by rebels: This claim includes referencing “Syria watcher” Eliot Higgins also known as “Brown Moses,” a UK-based armchair observer of the Syrian crisis who has been documenting weapons used throughout the conflict on his blog.

While Higgins explains these particularly larger diameter rockets (140mm and 330mm) have not been seen (by him) in the hands of terrorists operating within and along Syria’s borders, older posts of his show rockets similar in construction and operation, but smaller, most certainly in the hands of the militants.

The Washington Post contends that somehow these larger rockets require “technology” the militants have no access to. This is categorically false. A rocket is launched from a simple tube, and the only additional technology terrorists may have required for the larger rockets would have been a truck to mount them on. For an armed front fielding stolen tanks, finding trucks to mount large metal tubes upon would seem a rather elementary task – especially to carry out a staged attack that would justify foreign intervention and salvage their faltering offensive.

2. The sarin was fired from a regime-controlled area: The Washington Post contends that:

The report concludes that the shells came from the northwest of the targeted neighborhood. That area was and is controlled by Syrian regime forces and is awfully close to a Syrian military base. If the shells had been fired by Syrian rebels, they likely would have come from the rebel-held southeast.

What the Washington Post fails to mention is the “limitations” the UN team itself put on the credibility of their findings. On page 18 of the report (22 of the .pdf), the UN states [emphasis added]:

The time necessary to conduct a detailed survey of both locations as well as take samples was very limited. The sites have been well travelled by other individuals both before and during the investigation. Fragments and other possible evidence have clearly been handled/moved prior to the arrival of the investigation team.

It should also be noted that militants still controlled the area after the alleged attack and up to and including during the investigation by UN personnel. Any tampering or planting of evidence would have been carried out by “opposition” members – and surely the Syrian government would not point rockets in directions that would implicate themselves.

The U.N. investigators analyzed 30 samples, which they found contained not just sarin but also “relevant chemicals, such as stabilizers.” That suggests that the chemical weapons were taken from a controlled storage environment, where they could have been processed for use by troops trained in their use.

Only, any staged attack would also need to utilize stabilized chemical weapons and personnel trained in their use. From stockpiles looted in Libya, to chemical arms covertly transferred from the US, UK, or Israel, through Saudi Arabia or Qatar, there is no short supply of possible sources.

Regarding “rebels” lacking the necessary training to handle chemical weapons – US policy has seen to it that not only did they receive the necessary training, but Western defense contractors specializing in chemical warfare are reported to be on the ground with militants inside Syria. CNN reported in their 2012 article, “Sources: U.S. helping underwrite Syrian rebel training on securing chemical weapons,” that:

The United States and some European allies are using defense contractors to train Syrian rebels on how to secure chemical weapons stockpiles in Syria, a senior U.S. official and several senior diplomats told CNN Sunday.

The training, which is taking place in Jordan and Turkey, involves how to monitor and secure stockpiles and handle weapons sites and materials, according to the sources. Some of the contractors are on the ground in Syria working with the rebels to monitor some of the sites, according to one of the officials.

4. Cyrillic characters on the sides of the shells: The Washington Post claims:

The Washington Post’s logic fails even at face value. Terrorists operating inside of Syria also possess rifles and even tanks of Russian origin – stolen or acquired through a large network of illicit arms constructed by NATO and its regional allies to perpetuate the conflict.

Additionally, had the attacks been staged by terrorists or their Western backers, particularly attacks whose fallout sought to elicit such a profound geopolitical shift in the West’s favor, it would be assumed some time would be invested in making them appear to have originated from the Syrian government. The use of chemical weapons on a militant location by the militants themselves would constitute a “false flag” attack, which by definition would require some sort of incriminating markings or evidence to accompany the weapons used in the barrage.

5. The UN Secretary General’s comments on the report: The Washington Post itself admits the tenuous nature of this final point, stating:

“This is perhaps the most circumstantial case at all, but it’s difficult to ignore the apparent subtext in Secretary General Ban Ki-moon’s news conference discussing the report…”

That the Washington Post, and the interests driving its editorial board, could not even produce 5 reasonably convincing arguments as to why the UN report somehow implicates the Syrian government casts doubt on claims regarding the “wealth of technical detail” pointing in President Bashar al-Assad’s direction.

The UN report confirms that chemical weapons were used, a point that was not contended by either side of the conflict, before or after the UN investigation began. What the West is attempting to now do, is retrench its narrative behind the report and once again create a baseless justification for continued belligerence against Syria, both covert and as a matter of official foreign policy.

Tony Cartalucci’s article previously appeared at Globalresearch.ca and is reprinted with permission.