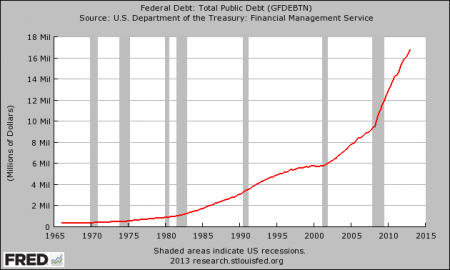 The largest mountain of debt in the history of the world just continues to grow even larger, and everyone knows that this colossal debt spiral is not going to end well.  But we all keep playing along because nobody wants the party to end.  Right now, there is an unprecedented ocean of red ink covering the planet.  Globally, governments have never been in so much debt, corporations have never been in so much debt and consumers have never been in so much debt.  But every time someone suggests that this is a problem and that we should at least try to get debt levels to settle down a bit, people start screaming that “austerity” will hurt the global economy.  And of course it will.  But we can’t continue to live way, way above our means indefinitely.  Well, we can try, but at some point this entire house of cards is going to come crashing down and we are going to be facing the greatest economic crisis the world has ever seen.

It is kind of like watching a slow-motion train wreck that you have no chance of possibly stopping that you know will end up killing lots of innocent people.  This debt crisis is going to end up destroying the global financial system, but there is not a thing that you or I can do to prevent it from happening.  The unprecedented debt binge that we are witnessing right now is going to continue until someday we hit a brick wall of financial disaster.  We can yell and we can scream, but it isn’t going to stop what is happening.

As the Telegraph recently noted, even the Bank for International Settlements is warning that debt levels are way too high.  According to the BIS, total public and private debt levels are now 30 percent higher than they were in 2008…

“This looks like to me like 2007 all over again, but even worse,” said William White, the BIS’s former chief economist, famous for flagging the wild behavior in the debt markets before the global storm hit in 2008.

“All the previous imbalances are still there. Total public and private debt levels are 30pc higher as a share of GDP in the advanced economies than they were then, and we have added a whole new problem with bubbles in emerging markets that are ending in a boom-bust cycle,” said Mr White, now chairman of the OECD’s Economic Development and Review Committee.

The BIS can see the disaster coming, but even they have no chance of preventing it.

For the rest of this article, I am going to focus on government debt, but please keep in mind that corporate debt and consumer debt are also totally out of control globally.  It would be very hard to overstate the nightmare that we are facing.

Japan now has a debt to GDP ratio of more than 211 percent, and as Simon Black of the Sovereign Man blog recently detailed, they are rapidly heading toward a national financial meltdown…

Looking purely at the numbers, Japan’s medium-term fundamentals are among the bleakest in the world.

Total government debt amounts to over 200% of the country’s entire GDP– a figure so large that the Japanese government spends 51.5% of the 43 trillion yen ($430 billion) they collect in tax revenue just to pay interest!

The only way they’ve managed to stay afloat is by issuing more debt, which makes the problem even worse. In fact, 46% of the 2013 budget is being financed by debt.

These guys are running out of rope. And fast.

China is facing a different sort of a problem.  In that nation, the growth of private domestic debt is wildly out of control.

There is no way that is sustainable, and at some point that massive bubble is going to burst.

Even though some European nations have supposedly implemented “austerity measures” in recent years, debt levels continue to rise rapidly.  The following are some numbers that were recently released which show that government debt to GDP ratios for some of the most financially troubled nations in Europe are absolutely soaring…

Anyone that tells you that the crisis in Europe is “over” is lying to you.  The debt crisis is getting worse, not better.

The biggest mountain of debt of all can be found in the United States.

30 years ago, the national debt was a little bit above a trillion dollars.

At this point, the U.S. already has more government debt per capita than Greece, Portugal, Italy, Ireland or Spain.  And since Barack Obama entered the White House, the debt to GDP level has soared to unprecedented heights… 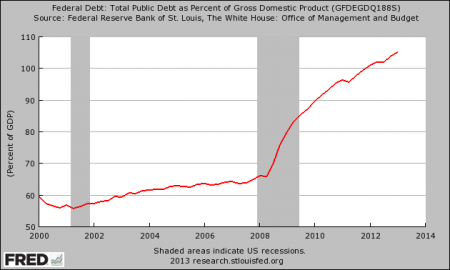 One reason for this is that the U.S. is facing some tremendous demographic challenges in the years ahead.

In other words, our population is getting older.

It is being projected that the number of Americans on Social Security will rise from 57 million today to more than 100 million in 25 years.

How in the world are we possibly going to pay for that?

Already, we are very heavily dependent on foreigners to pay our bills.

According to the U.S. Treasury, foreigners hold approximately 5.6 trillion dollars of our debt at this point.

So what would happen if we went to war with Syria and they decided to quit borrowing from us and they started dumping our debt instead?

And actually, according to Zero Hedge foreigners have already started to dump a little bit of our debt…

Today’s TIC data showed something disturbing: for the fourth month in a row, foreigners were net sellers of US Treasury paper in July, as total foreign holdings declined from $5.600 trillion to $5.590 trillion which represents 49% of total marketable debt (including the debt owned by the Fed of course). In other words, since peaking at $5.724 trillion in March, foreign-held debt has declined by $134 trillion, at a time when yields have surged on fears the Fed’s tapering of its own purchases of bonds will mean less Fed frontrunning opportunities.

We certainly cannot afford for that to continue, because we desperately need other nations to finance our reckless spending.

Our debt is wildly out of control, and the only way we can keep the entire system from collapsing is to go into even more debt.

As I noted recently, if the U.S. national debt was reduced to a stack of one dollar bills it would circle the earth at the equator 45 times.

That is a whole lot of money.

But most Americans do not consider it to be a problem because disaster has not struck yet.

Unfortunately, they simply don’t understand how quickly an exponential problem can overwhelm you.  I think that the following illustration from Simon Black is particularly helpful…

Let’s say you’re at a party in a small apartment that’s about 500 square feet in size. Then suddenly, at 11pm, a pipe bursts, starting a trickle into the living room.

Aside from the petty annoyance, would you feel like you were in danger? Probably not. This is a linear problem– the rate at which the water is leaking is more or less constant, so the guests can keep partying through the night without worry.

But let’s assume that it’s an exponential leak.

By 11:27pm, there’s only six inches of standing water. Yet by 11:31pm, just four minutes later, the entire room is under nearly 8 feet of water. And the party’s over.

For nearly half an hour, it all seemed safe and manageable.People had all the time in the world to leave, right up until the bitter end. 11:27, 11:28, 11:29. Then it all went from benign to deadly in a matter of minutes.

By the time that our politicians and the talking heads on the mainstream media admit that we have a debt emergency on our hands, it will probably be far, far too late.

The greatest debt crisis the world has ever seen is coming, and there is nothing that anyone can do to stop it.

But you can take measures to get prepared for it.

Please get prepared while you still can.