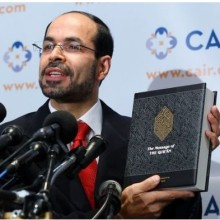 Hamas-CAIR lost its 501 C3 status because they refused to file tax returns (that’s for the apes and pigs, I guess).

CAIR failed to file required annual reports, known as form 990s, detailing their revenues and expenses, for three consecutive years. CAIR had been a non-profit on its own, but in 2007, the IRS approved a separate tax-exempt CAIR Foundation. The foundation never filed any subsequent reports. Both the foundation and CAIR national are on the purge list.

The CAIR Foundation won exempt status in 2007 and then never filed any annual reports. That year, theWashington Times reported that CAIR’s membership plummeted by 90 percent, from a high of 29,000 people in 2000 to less than 1,700 in 2006. CAIR vehemently denied the report when it was issued. But a year later, when the organization sought to have its name removed from a list of unindicted co-conspirators in a Hamas-financing prosecution, CAIR attorneys tied the diminishing support to the 2007 co-conspirator list.

Anecdotal information indicates the group increasingly has turned to foreign donors for operating revenue. In 2006, State Department records obtained by the Investigative Project on Terrorism show, CAIR sent delegations to Saudi Arabia and the United Arab Emirates seeking millions of dollars in support.

In 2009, Awad solicited Libyan Dictator Muammar Gaddafi to help underwrite a program to distribute 1 million copies of the Quran to government officials and the general public in America and to help start up a new foundation Awad was trying to launch.

But CAIR got their 501C 3 status back while patriot groups like the Tea Party were being targeted by the IRS.

Where are CAIR’s tax returns? Who is giving them millions to fund their Islamic supremacist machine. Their mother organization, the Muslim  Brotherhood? Al Qaeda?

We want to see the jihad millions (billions, perhaps) and where their dirty dough is coming from. Before they stopped obeying US tax law and filing returns, we know that one Saudi wahhabi prince gave Hamas-CAIR 50 million dollars back in 2007.

Today they released another ridiculous report concerning the pathetic islamophobia financial network here. How wrong did they get it? They have me as President as Jihad Watch, need I say more?

The bottom line is  American needs to know who is funding these terror supporters. It’s a national security issue. Release the returns. What is it that Hamas-CAIR is hiding and doesn’t want us to see?