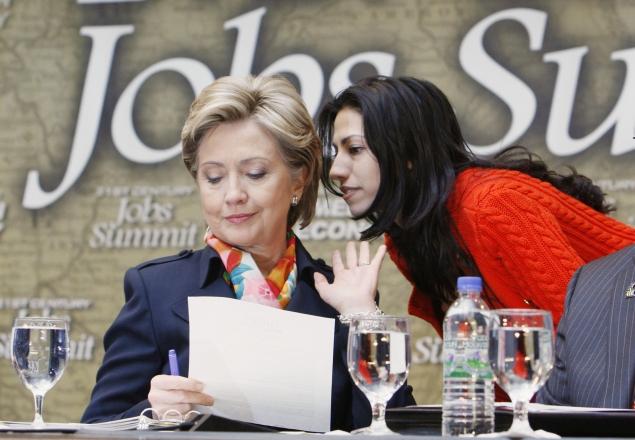 The news that is spreading across social networks like wildfire is certain to make Hillary Clinton the odds on favorite to win the Democratic nomination in 2016. This is not the country I grew up in, it would appear.

I am one of the last to report it but, not to be outdone, I want my slice of this pie. America loves to watch a good train wreck.

It’s true that Gennifer Flowers dropped a bombshell in an exclusive interview with The Daily Mail:

Gennifer said: ‘I don’t know Huma or the Weiners. I just know what Bill told me and that was that he was aware that Hillary was bisexual and he didn’t care. He should know.

‘He said Hillary had eaten more p***y than he had.’

Yet however much their roles as mistress and wife cast Gennifer and Hillary Clinton as natural rivals Gennifer claimed to feel a sense of solidarity with Hillary, 65, and would support Hillary’s candidacy for President.

Wait a second Gennifer Flowers. Would you support her if you found out she was not a lesbian? I’m not following your reasoning.

What if Bill “I did not have sexual relations with that woman” Clinton was lying?

As a member of the lesser sex I can verify that men will sometimes say what needs to be said in order to accurately determine a woman’s pant size.

Nevertheless, we will take a woman who posed in Penthouse and a President who received sexual favors in the oval office at their word.

Because they still have to be considered more credible than Hillary Clinton who couldn’t tell the truth about Benghazi if her life depended on it.

So if Hillary is bi-sexual, gay, lesbian, bull-dyke or whatever they call themselves these days, the real question is…

I’m glad you asked because, considering that Barack Obama was our first black president and first gay president, I am starting to think we have become a nation seeking some “strange.” A person’s moral compass and political ideals no longer seem to be the most important issue.

So do you have to be gay to be elected President in this country now? Or is it simply just considered to be an asset?

Regardless of how little I would trust the word of Bill, Hillary or Gennifer I should note that this story is not new and here’s a YouTube video from a couple of years ago that talks about the same subject matter.

I think the hosts are wrong in this video because I think Hillary will run and America had better wake up quickly. Because if the election were to happen today I believe she would beat any republican challenger and it has nothing to do with her sexuality.

It has everything to do with the huge MIND **** that has been levied upon the people of this country. This story is a little fun and a lot of people can’t help but look at it, but let’s get back to what matters.

America doesn’t need another bi-sexual President if that means that we are going to end up getting Hillary Clinton. This woman could have slept with 10,000 four-dollar Filipino hookers and there is nothing, about her sexuality, that would make me feel less about her than four dead Americans and a country that still demands answers.

Give me a gay man or woman who cares about America and I’d take them over a straight Obama or Clinton any day.