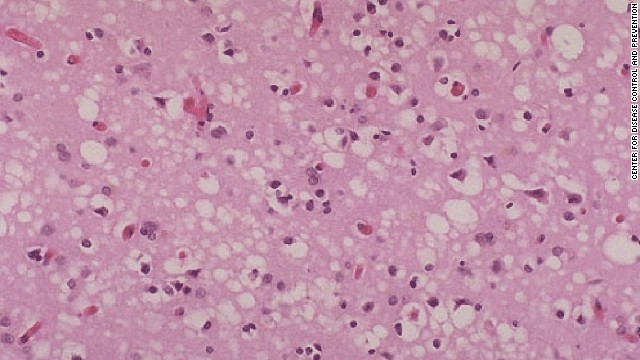 This tissue slide shows sponge-like lesions in the brain tissue of a classic CJD patient. This lesion is typical of many prion diseases.

A case of the human form of mad cow disease –  the always fatal  Creutzfeldt-Jakob disease – has just been confirmed in New Hampshire.

Bovine spongiform encephalopathy (BSE), commonly known as mad cow disease, is a fatal transmissible neurodegenerative disease in cows that causes a spongy degeneration in the brain and spinal cord. BSE has a long incubation period, about 30 months to 8 years.

Mad cow disease’s infectious agent is neither a bacterium nor a virus. Instead, the infectious agent is a protein called prion that cannot be destroyed even if the beef or material containing the prions is cooked or heat-treated. Prions remain viable even in high temperatures of over 600 degrees Celsius!

BSE is caused by cattle, which are normally herbivores, being fed the remains of other cattle in the form of infected meat and bone meal.Another contributory factor was the feeding of infected protein supplements to very young calves. The origin of the disease itself remains unknown.

When humans ingest BSE-infected meat — especially brain, spinal cord, and digestive tract tissue, although the infectious agent can be found in virtually all tissues, including blood — what results is Creutzfeldt-Jakob disease (CJD).

Before controls on high-risk offal were introduced in 1989, between 460,000 and 482,000 BSE-infected animals had entered the human food chain. By October 2009, CJD had killed 166 people in the United Kingdom — the country most affected — and 44 elsewhere.

Greg Botelho reports for CNN, Sept. 21, 2013, that health officials have confirmed that a patient who underwent neurosurgery at a New Hampshire hospital earlier this year had Creutzfeldt-Jacob disease — a rare, rapidly progressing and always-fatal degenerative brain disease.

The diagnosis of Creutzfeldt-Jakob disease was confirmed by the National Prion Disease Pathology Surveillance Center, which reported its conclusion to New Hampshire’s health department and Catholic Medical Center on Friday.

The now-deceased patient had undergone neurosurgery at Catholic Medical Center in Manchester. But by the time CJD was suspected, equipment used in the patient’s surgery had been used several other operations.This raised the possibility that the equipment might have been contaminated — especially since normal sterilization procedures are not enough to get rid of the prions — thus potentially exposing the other patients to infection. So authorities in two states issued a warning that as many as 13 patients may have been exposed to surgical equipment used during the patient’s surgery, thus to the same disease.

People with Creutzfeldt-Jakob disease typically show signs of rapidly progressing dementia, impaired vision and personality changes, among other symptoms, according to the National Institutes of Health. Yet while it can be suspected, the only way the disease can be confirmed is through tests conducted after a person’s death.

Creutzfeldt-Jakob disease has a long incubation period before symptoms appear — sometimes up to 50 years – according the National Institutes of Health. There’s no test, so it may take many years before these patients would know if they were infected.

About 300 people a year in the United States come down with Creutzfeldt-Jakob disease, according to the U.S. Centers for Disease Control and Prevention (CDC). The CDC has said that no cases of the disease linked to the use of contaminated medical equipment have been reported in the United States since 1976.

Most medical devices are sterilized by heat, but the World Health Organization recommends the use of a caustic chemical like sodium hydroxide to disinfect equipment that may have come in contact with tissues that could cause Creutzfeldt-Jakob disease.

That’s just one reason — a minor reason — why I don’t eat meat.