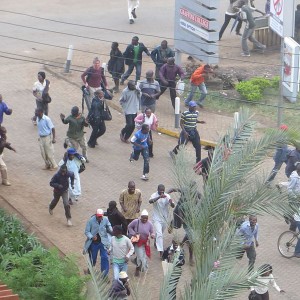 Over the past couple of days, we have witnessed some absolutely horrific examples of Islamic terror groups specifically targeting Christians and those from other non-Muslim religions.  Sadly, this is not a new phenomenon.  Radical Islamic jihadists are constantly attacking churches and slaughtering Christians all over the planet.  The recent events in Pakistan, Kenya and Egypt may have taken this persecution to a new level, but this is just the continuation of a trend that has been building for years.  Unfortunately, Barack Obama does not seem too concerned about Islamic terrorism.  In fact, he specifically directed that “all references to Islam” be removed from terrorism training materials that the federal government uses.  If that wasn’t bad enough, now Obama is actually supplying weapons to the radical jihadist rebels that want to take over Syria, and he appears to be very ready to use the U.S. military to attack the Assad regime directly if “negotiations” with the Syrian government fail.  In essence, Obama wants the United States to be allies with psychotic jihadists that have the exact same radical philosophy that those who are killing Christians in Pakistan, Kenya and Egypt have.

In Pakistan, the Taliban (a very close cousin of al-Qaeda) has already claimed responsibility for the worst church bombing in the history of that nation.  The attack left 85 dead and nearly twice that many wounded.  To say that this was a horrific attack would be a massive understatement…

The attack on All Saints Church, which also wounded 140 people, underlines the threat posed by the Pakistani Taliban at a time when the government is seeking a peace deal with the militants.

The attack occurred as hundreds of worshippers were coming out of the church in the city’s Kohati Gate district after services to get a free meal of rice.

‘There were blasts and there was hell for all of us,’ said Nazir John, who was at the church with at least 400 other worshippers.

‘When I got my senses back, I found nothing but smoke, dust, blood and screaming people. I saw severed body parts and blood all around.’

In Kenya, a team of Al-Shabaab gunmen stormed a shopping mall in Nairobi and murdered at least 62 people.

What makes that attack even more disturbing is that the terrorists specifically targeted non-Muslims.

In fact, hostages were given a test by the terrorists to determine whether or not they were actually Muslims.  Those that failed the test were executed…

The reason the Islamists targeted the Westgate shopping centre was clear from the moment they stormed inside brandishing AK-47s and grenades. Anyone who was not a Muslim, or could not prove that they were, was immediately targeted. Reports from separate floors of the building in the first hours of the assault told how the attackers, speaking rough Swahili and English, shouted at Muslims to identify themselves.

Many people came forward. They were ordered to speak in Arabic, or to recite a verse from the Koran, or to name the Prophet Mohammed’s mother. Those who passed this test were allowed to flee. Those that did not were executed, including children.

You can find some very graphic pictures of the attack right here.

Are you starting to understand why I use words such as “psychotic” to describe these terrorists?

And all over the world these radical jihadists seem to have a particular hatred for Christians.

Just consider what has happened in Egypt over the past few months.  After the Egyptian military removed the Muslim Brotherhood from power, radical Islamists responded by destroying more than 80 Christian churches…

On July 4th, the day after the Egyptian military liberated the nation of Muslim Brotherhood rule, Christian Copts were immediately scapegoated and targeted.  All Islamist leaders—from Brotherhood supreme leader Muhammad Badi, to Egyptian-born al-Qaeda leader Ayman Zawahiri, to top Sunni cleric Sheikh Yusuf al-Qaradawi—made it a point to single out Egypt’s Copts as being especially instrumental in the ousting of former Islamist president Morsi, ushering in a month of pogroms against the nation’s Christian minority.

Among other things in July, unprecedented numbers of Christian churches were attacked, plundered, desecrated, and torched.  According to one Egyptian human rights lawyer, “82 churches, many of which were from the 5th century, were attacked by pro-Morsi supporters in just two days.” Al-Qaeda’s flag was raised above some churches; anti-Christian graffiti littered the sides of other churches and Coptic homes.  Due to extreme anti-Christian sentiment, many churches ceased holding worship services until recently.  Dozens of Coptic homes and businesses were also attacked, looted, and torched.

Should the U.S. military ever be used to help radial jihadists that would commit such horrible acts?

That is such a crazy question that you would think that nobody would ever have to ask such a thing.

Unfortunately, that is exactly what Barack Obama wants to do.

In Syria, radical jihadists are doing all of the same kinds of things that you just read about.  As I have written about on numerous occasions, the Syrian “rebels” are savagely killing Christians, repeatedly using chemical weapons and dismembering little girls.

In a previous article, I included eyewitness testimony from a Christian missionary who explained what happens when the “rebels” take over a Christian area in Syria…

“The Christian residents were offered four choices: 1. renounce the ‘idolatry’ of Christianity and convert to Islam; 2. pay a heavy tribute to the Muslims for the privilege of keeping their heads and their Christian faith (this tribute is known as jizya); 3. be killed; 4. flee for their lives, leaving all their belongings behind.”

And now this sick philosophy is even rubbing off on little children.  In the Syrian town of Ras al-Ayn, children were recently filmed pretending to behead their enemies while shouting Allahu Akbar.

What kind of place will Syria become if Obama is successful and the Assad regime is removed?

Will it become a jihadist paradise where Christians and all other non-Muslims are systematically exiled or exterminated?

These jihadists are a cancer, and Obama seems absolutely determined to help that cancer spread in Syria and beyond.