How dare Barack HUSSEIN Obama turn the Memorial Service for the 12 murdered at the Washington Navy Yard into a political platform for his already failed in Congress gun control platform.

“I’m here today to say there’s nothing routine about this tragedy. There’s nothing routine about your loss…We must insist here today there is nothing normal about innocent men and women being gunned down where they work,” Obama told those gathered (setting the stage for calling this massacre yet another case of ‘workplace violence’ perhaps), and then he morphed into full political campaign mode… forgetting why he was there…as he started spewing his entire ‘bad gun’ rhetoric.

The killer, Aaron Alexis, a black former Navy reservist, had untreated mental health issues including the usual ‘hearing voices’ excuse, but friends have come forward saying he was angry that his military benefits were being held up and he blamed that on discrimination because he was black.  Now add the ‘voices’ into the discrimination mix and you have one man ready to explode…which he did.

And YES guns were his weapon of choice but guns per se had NOTHING to do with what he did for if it was NOT guns it would have been something else.  Alexis was intent and keenly focused on doing as much carnage as he could, and would have done so with knives, acid, gas, or whatever he could get his hands on if he couldn’t get them on a gun.

So Obama had NO right doing what he did…saying what he did…for his lack of true compassion and leadership defamed and dishonored the memory of those lost and those they left behind.  The survivors and families were there to honor the fallen and to be comforted by the Commander-in-Chief NOT to hear about ‘bad guns’ and those ‘bad’ Republicans who do NOT want to ban ‘bad’ guns. 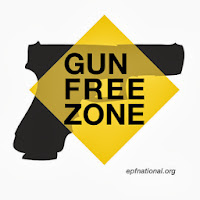 Spewing political nonsense and deliberately withholding the truth is paramount to lying by omission, and Obama did just that as he told those gathered in grief that “the US  military needs to do more to secure its facilities,” leaving out the very important fact that our soldiers stationed at our military bases are unarmed because in 1993, Democratic President Bill Clinton turned our military bases into ‘gun free zones.’

And as we all know sometimes the truth is just too shocking to believe, but the truth remains that ‘Billy-Boy’ cow-towed to ‘political correctness’ and decreed that US military personnel were to surrender their Second Amendment rights…one of the very rights that our military swears an oath to support and defend.

So thanks to Bill Clinton our military personnel are forbidden from carrying their own personal firearms (guns) on base, and that “a credible and specific threat against Department of the Army personnel must exist in that region” before military personnel “may be authorized to carry firearms for personal protection.”

And with our military bases being ‘gun free zones’ a direct correlation to mass shootings exists for those intent on killing know that once they get a gun onto a base they are basically free to kill…free to kill because they are facing unarmed military personnel who have been stripped of the very means to defend themselves.

And this has been going on for 20 years now, and in those 20 years more violence and deaths have occurred on said bases than ever before…one other recent case in point is Fort Hood…and this miserable excuse of a president wants to strip away their and our gun rights even more as in his eyes the gun is what killed…NOT the killer using the gun.

And bringing all this up at the Memorial Service for the 12, and then to add insult to injury Obama cites the Sandy Hook Massacre as he railed against lax gun laws that he blamed for murder rates in the US being three times higher than in other developed nations…forgetting the oh so key fact that our population numbers are many times higher than other developed nations.

And then telling the grieving that he “cannot accept” that politics are too “frozen” to change gun laws, urging them to demand change in the name of their lost loved ones is more than just political grandstanding…it borders on the obscene.

Bottom line…the Washington Navy Yard Massacre did NOT have to happen nor did the Foot Hood Massacre have to happen and would NOT have happened if our military…the very people who lay their lives on the line everyday to keep us safe and free at home…were NOT ordered to be unarmed while on base  And if these tragedies did NOT happen ‘We the People’ would NOT have to listen to Barack HUSSEIN Obama turn what should be a solemn occasion into just another stop along the never ending Obama campaign trail…a campaign that unfortunately he’s already won.